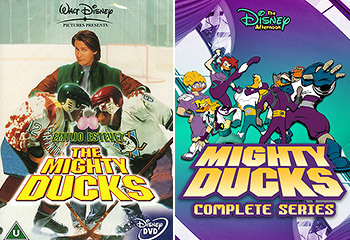 Left: A film about a down-on-its-luck hockey team's journey to stardom.
Right: An animated series about hockey-playing duck superheroes.
"Every single word in this title is a lie. There are no teenagers, no mutants, no ninjas, and no turtles. Well, there actually may be turtles — it's hard to tell."
— Hardcore Gaming 101, on the Vietnamese bootleg iOS game Teenage Mutant Ninja Turtles

This occurs when a derivative work (an adaptation, a remake, or a reimagining) is so different from the work it took its name from that the only thing actually tying it to the original work is the title, a few character names and, if lucky, the broad premise. It would stand perfectly as an original work if references to the source were removed.

This can happen when the work was originally intended as something completely different, but, being slightly similar to an existing franchise, it is changed to fit in that franchise, or it can be straight-up title hijack.

One reason this happens is the fact that established properties and "name awareness" makes things much easier to get greenlit than original properties. In some cases producers purchase franchise rights for the name alone, and slap it on their own original product as a way of getting it pushed through the studio system. Video Game and Cult Classic franchises are especially prone to being used this way by third parties with no other interest in the franchise, as they are often relatively cheap to buy or license for this purpose. In some cases, this is even done for the purposes of hanging onto the trademark. If the project began life as an original work and was altered in the process to be part of an established work, that makes it a Dolled-Up Installment. The inverse of this would be Divorced Installment.

Many a Cash Cow Franchise has descended to this at least once. It may be considered the Oddball in the Series.

The response often involves They Changed It, Now It Sucks!, but an In Name Only work may well be decent, or even good (if not better), as long as it's assessed on its own merits rather than being measured by how faithful it is to the original work; in effect, the work in question is a Contested Alternate Continuity or Adaptation.

If the work in question is not an attempted adaptation of another work, but merely sports a misleading name, that's a Non-Indicative Name. If the name used to be relevant but less or even not later, it is Artifact Title. If an adaptation continues after the original source material runs out, that's Adaptation Expansion. If multiple works share the same name but are unrelated, you have Similarly Named Works.

A good way to tell if an example is really this trope or just a bad adaptation: if one were to change the title to something else, would anyone understand that the work is supposed to be an adaptation? If the answer is "no", then the adaptation is this trope.note Changing character names is not necessary for the test; there is always the possibility of coincidence, or of Shout-Out Theme Naming. See also Old Guard Versus New Blood. A Transplanted Character Fic may often feel like this.

Contrast Serial Numbers Filed Off, Spiritual Adaptationnote Which are basically In All But Name, Exactly What It Says on the Tin, Expy, Remake.

Samurai Jack is not a samurai

In his History Summarised video on Samurai, Blue points out how Samurai Jack, despite his name, doesn't fit into what is historically considered a true Samurai.

Samurai Jack is not a samurai

In his History Summarised video on Samurai, Blue points out how Samurai Jack, despite his name, doesn't fit into what is historically considered a true Samurai.