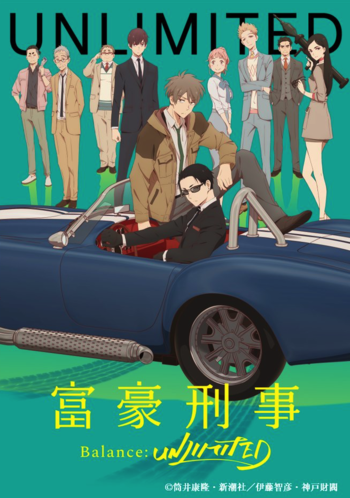 Daisuke Kambe has no problems using his vast personal fortune to solve crimes, assessing lives based on their financial worth. He joins the Modern Crime Prevention Headquarters where he is partnered with the compassionate Haru Kato, who values human life and is disgusted with Daisuke's materialistic ways. Together, they must stop butting heads and overcome their opposing world views to solve the toughest crimes in the precinct.

The Millionaire Detective - Balance: UNLIMITED is an anime series produced by CloverWorks, former sub-studio of A-1 Pictures and directed by Tomohiko Itō. The anime began airing April 9th, 2020 and can be viewed here

. However after the release of the second episode, the future episodes would be delayed due to the COVID-19 pandemic. The third episode was released on July 30, 2020.

This is the second adaptation of the Fugo Keiji novel from the 1970s by Yasutaka Tsutsui with the first one as a live-action drama in 2005 where it had a female main character.