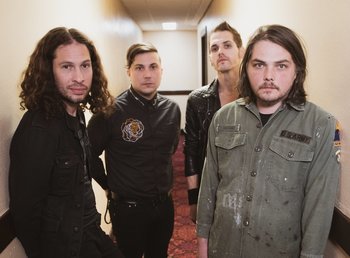 My Chemical Romance is an American alternative rock band, often cited as a quintessential example of the emo genre (but don't tell them that—also, that's not a bad thing).

Their music is best described as a mixture of Post-Hardcore, Pop Punk accessibility, horror punk-influenced lyrics and stylings, and a heaping dose of over-the-top theatrics and album rock storytelling straight out of the 1970s—all of this presented with the look of a Goth Rock band. They also have a notoriously bad Broken Base; enter at your own risk, but don't let that distract from the crazy-awesome music.

The band formed in New Jersey around late 2001 and released their first song, "Skylines and Turnstiles." The band has said that the theme and style of their music were initially inspired by their feelings during the September 11, 2001, terrorist attacks. They released their debut album I Brought You My Bullets, You Brought Me Your Love in 2002, combining elements of Hardcore Punk, Post-Hardcore, and emo. Its lead single, "Vampires Will Never Hurt You," became a hit on college radio.

Their 2004 sophomore album Three Cheers for Sweet Revenge proved to be their breakthrough release, spurred on by the success of the singles "Helena" and "I'm Not Okay (I Promise)". It is now viewed as an essential album of the early-2000s emo scene with its theatrical sound, gothic aesthetics, and powerful mix of post-hardcore aggression and strongly crafted songs.

In 2006, drawing on their love of Pink Floyd's progressive rock and glam rock bands such as Queen and T.Rex, they combined their new influences with their old post-hardcore sound to create what is considered their defining work, entitled The Black Parade. While most popular rock bands in 2006 were focused on being raw and influenced by garage, The Black Parade was intentionally bombastic and excessive, reflecting the 70s rock bands that Gerard Way loved and the hip, indie establishment treated with disdain. Throw in its rock opera storyline of a dying cancer patient and his experiences in the afterlife, and you have a 1970s album brought to life in the twenty-first century. The album was a critical and commercial success, with several review sites and magazines placing it as one of the best albums of the decade.

Their final album, 2010's Danger Days: The True Lives of the Fabulous Killjoys divided the fanbase with its lighter sound and design, more heavily influenced by Glam Rock and Power Pop. Its sound incorporates indie rock, dance rock, pop punk, and Stooges-era garage rock. It also features a storyline, but this one is more frantic, enthusiastic, and exuberant than the morbid tragedy of the last.

(As noted before, "dividing the fanbase" is actually quite easy: Starting from their first album, fans were constantly arguing over anything from different themes/moods of the music to the color of Gerard's hair.)

The band announced that they had broken up

. Although the news proved memetically devastating to their fans, the members still remained close friends, and Gerard released singles featuring both Mikey and Ray.

In summer 2016, the band uploaded a video ending with the date of September 23 of that year, and it was also found that they had deleted the tweet announcing their breakup. The prospects of a potential reunion instantaneously set the Internet ablaze. Although the video was revealed to be promo for a 10th-anniversary reissue of The Black Parade — with the band confirming that they had no touring or reunion plans — the message that they still had a place in music was loud and clear.

The band privately got back together in 2017

and played a reunion show in Los Angeles in December 2019, with plans for a small tour (with Australian, Japanese, and New Zealand dates) and festival appearances in 2020 (later postponed to 2022 due to COVID-19). In May 2022, they released a new single entitled "The Foundations of Decay", which was their first song released since 2014.

Please don't confuse them with My Bloody Valentine, who are a British shoegazing band who have nothing to do with them, though Gerard admits they inspired the "My" in their band name. (The "Chemical Romance" part is a quote from the back of the Irvine Welsh novel, Ecstasy: Three Tales of Chemical Romance).

Welcome to the Tropes Parade: