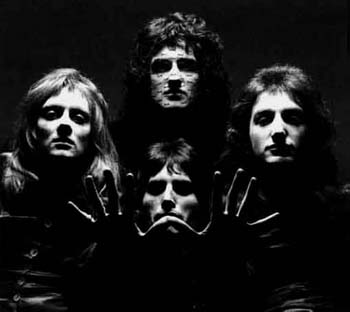 Queen during the mid-'70s. Clockwise from the top: Brian May, John Deacon, Freddie Mercury, and Roger Taylor.
"We are a very competitive group. We are four good writers and there are no passengers."
— Freddie Mercury as quoted in the Freddie Mercury Solo Collection
Advertisement:

The band was formed in 1970 with front-man Freddie Mercury (born Farrokh Bulsara), guitarist Brian May and drummer Roger Taylor, evolving from the ashes of an earlier band called Smile, which featured Brian and Roger and was fronted by a fellow called Tim Staffell. Freddie, a friend of all three, was also the band's biggest fan who jumped at the opportunity to fill the vacancy left by Staffell's departure, choosing a new name for the band for good measure. After going through a series of short-term bassists, they finally settled with John Deacon in 1971.

The band is often thought to have broken up after Mercury's 1991 death from complications of AIDS. While that isn't quite true, the band chose not to replace Mercury and stopped virtually all activity besides a posthumous album with Mercury's previously recorded vocals in 1995 and one single in 1997. Deacon officially retired from the band soon afterward.

May and Taylor have continued to record and tour in collaboration with other musicians under the "Queen + ..." moniker, which resulted in one album, The Cosmos Rocks with Paul Rodgers of Free and Bad Company fame as singer. The album was greeted with critical disdain and a fan backlash over the perceived nature of Rodgers as a poor substitute, despite May and Taylor repeatedly pointing out that he was only a featured artist and not a replacement for Mercury. Rodgers and the band went their separate ways in 2009, and subsequently, the group performed with former American Idol contestant Adam Lambert in 2011, and continues to do so to this day.