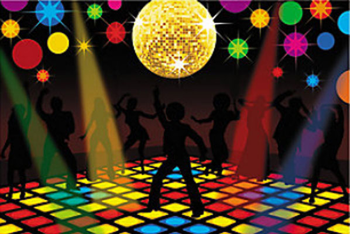 Disco is the music that defined the late 1970s and, for 25 years after, was the genre everyone loved to hate.

Originating in France ("disco" is short for "discotheque") in the years during and after World War II, discotheques were a response to the straitened times that made it difficult (and even dangerous, during the Nazi occupation) to offer live music and floor shows. Similar in concept to the "Juke Joints" of the 1930s only using Disk Jockeys instead of Juke boxes, discos were a new form of night club based around recorded music and a dance floor that turned their patrons into the floor show in a form of kinetic karaoke. While eliminating bands and floor shows greatly simplified the logistics of operating a night club, discos also offered the added advantage that one could simply ditch the turntable and run if one came to the negative attention of the local authorities. Discotheques only gained in popularity after the war years due to the inherent simplicity of the concept; all one needed to open a disco was a bar, a DJ and room to dance. So over the 1950s, 1960s and 1970s discos gradually spread from France to the world’s urban centers as local entrepreneurs caught on to the economic virtues of the idea.

But in the early 1970s the prevailing tides of pop music shifted in a direction that wasn't particularly danceable. Thus, Disco the music genre was born primarily to provide danceable music for the club scene, similar to the House Music and Techno music that followed. As a genre, the music itself was fairly basic: A fusion of Funk and pop styles with simple hooks and lots of rhythm tracks layered over a driving beat that took full advantage of the newly-popular synthesizer’s ability to produce cadenced notes with the press of a single key. For a brief time in the late 1970s, disco was the biggest thing ever, spurred on by the blockbuster success of the film Saturday Night Fever and its soundtrack. Discotheques like New York's famous Studio 54 became the places for the hip and trendy to be and be seen.

Then, even before The '80s officially started, a backlash emerged. Disco's hip and urban image had little appeal to people who were neither, while many fans of white pop and black funk hated disco's fusion of their preferred styles. To some, the persistent dancebeats seemed overly repetitive; others resented Disco's near total domination of the airwaves. Radio stations started advertising "Bee Gees free weekends". The Chicago White Sox hosted a "Disco Demolition Night" promotion that got so out of hand that it turned into a riot. It got so bad that even rock artists who were influenced by disco, like Rod Stewart, were attacked and parodied.

Attacked on all sides and with a powerful image against it, disco was fading fast and completely dead by early 1981, and with it the fashions and styles related to or heavily associated with it (such as flared trousers). For the rest of 1980s, admitting that you liked disco may as well have been admitting to cannibalism. While dance artists like Madonna and Janet Jackson continued to take influence from it and it also had an influence on early Hip-Hop, whatever remaining fandom the genre itself still had was restricted to gay clubs, which marginalized it even further. Disco would start to reemerge (or at least, come to the surface for fresh air) during 1990s' wave of nostalgia for the 1970s and its backlash against all things 1980s, mainly in the form of sampling for rap and dance songs (it didn't hurt that most popular dance music, particularly House and its offshoots, can trace its lineage straight back to disco). Still, during this same time, The Simpsons had a character named Disco Stu who was used almost purely for comic relief, showing that the genre was still a ways away from returning to public acceptance.

Today, it seems as though the former Trope Namer for Condemned by History (originally "Deader than Disco") is becoming a subversion of its own trope. The newest generation of teenagers has grown up with no memory of disco or their parents' hatred of it; to them, it's simply a style of music that they will like or dislike on their own merits. The SiriusXM Disco station probably introduced more than a few new fans, as seen by the surprisingly large reaction to its removal, which forced it to be Un-Canceled. Similarly, the advent of the internet allowed some people to discover disco for the first time after terrestrial radio stations stopped playing it. Finally, music historians who have investigated why disco became so fiercely hated agree that much of the backlash was due not to overexposure but to homophobia and, to a lesser degree, sexism and racism (Disco having succeeded, if only for a brief time, in uniting Americans across color and sexual lines: being an African American music genre that had heavy female participation). In 2020, Disco finally experienced something of a revival in the US, with the emergence of new artists like Dua Lipa and Doja Cat that made disco the core of their sound, while established artists like Lady Gaga, Justin Timberlake, and even Smashing Pumpkins put out new disco-tinged songs.

Of course, the above only describes the United States. If you ask a Brit or a European about any anti-disco backlash, you will likely get a series of puzzled looks. Across The Pond, post-disco stayed popular well into the '80s, heavily influencing New Wave Music, Synth-Pop and other styles of popular music such as Italo Disco. And in Russia, it lingered well into early 1990s. For much of The Eighties, the global pop charts were dominated by derivatives of Disco, post-disco and Punk Rock. Artists like Amanda Wilson and Laura White now carry its torch proudly into the present day. And this isn't even taking into account Disco's influence on underground music, especially Post-Punk bands like Public Image Ltd. and ex-No Wavers like Material, Contortions and Liquid Liquid, as well as New Wave acts like Talking Heads. All operated under the basic premise of "take a disco beat and pile weird stuff on top of it", often to great and innovative effect. PiL even had a hit with a song called "Death Disco"... although who was singing probably had some effect. There was also the Industrial fascination with Eurodisco, but that's another matter entirely. This marriage of Punk and Disco later evolved into the Alternative Dance genre of the late 1980s and early 1990s as exemplified by bands like Depeche Mode, New Order and Happy Mondays as well as the more overtly disco-influenced Dance-Punk genre of the early 2000s.

Things you're likely to see in a depiction of a disco include:

Groups and musicians associated with Disco: