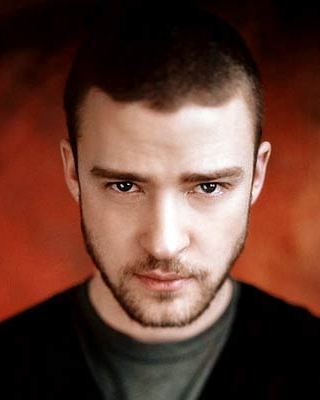 Influences:
"I think music will always be a big part of my life. I can't go five minutes without singing, sometimes unconsciously. And people stare at me, and I'm wondering why they're staring, and then I'm realizing that I'm belting out a tune."
Advertisement:

Justin Randall Timberlake (born January 31, 1981) is an American pop artist and actor who has been working since 1996. He is a former member of the late 1990s Boy Band *NSYNC and a sensation among the teenaged female demographic. He has won six Grammy Awards as well as four Emmy Awards. He got his big break when he appeared as a contestant on Star Search, and went on to star in Disney Channel's television series The New Mickey Mouse Club where he met future bandmate JC Chasez.

In 2002, he released his debut solo album, Justified, which sold more than 7 million copies worldwide. The album spawned the hits "Cry Me a River" (which helped spur the Celebrity Break-Up Song trend of the 2000's) and "Rock Your Body". Timberlake continued his success with his second solo album, FutureSex/LoveSounds (2006), debuting at number one on the Billboard 200 chart, and produced the US number-one hit singles "SexyBack", "My Love", and "What Goes Around.../...Comes Around". He also lent his 2003 song "I'm Lovin' It" to McDonald's for their current advertisement campaign of the same name, cementing his legacy early on.

Aside from music, he has also begun an acting career, while his other ventures include record label Tennman Records, music production team The Ys, fashion label William Rast, and the restaurants Destino and Southern Hospitality. Not to mention being a minority owner of the NBA's Memphis Grizzlies; despite his relatively small financial interest, he has been active in the team's free agent recruiting process.

He has also played roles in movies, such as Shrek the Third, Friends with Benefits, and The Social Network, the latter of which garnered much acclaim for his portrayal of Sean Parker. As his appearances on the Nickelodeon Kids' Choice Awards of past years have shown, music and theatrics are not his only talents, for better or worse. He has also produced a number of popular collaborations with both Andy Samberg and the full troupe of The Lonely Island, including the viral song/video "Dick in a Box".

Tropes-wise, he is the Trope Namer of Wardrobe Malfunction, first using in an apology for exposing Janet Jackson's bare breast in the middle of the halftime show for Super Bowl XXXVIII in 2004.