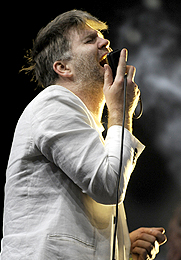 James Murphy of LCD Soundsystem
The term "dance-punk" was first used in the early 80s (possibly in Great Britain) to describe punk groups with a more rhythmic tempo which made it easier to dance to. Dance-punk bands had influences from disco, funk, and other dance music styles popular at the time. As EDM became popular in the 80s and 90s, some punk and post-punk bands became influenced by this genre. Around this time, the few (if any) dance punk like bands were labeled punk-funk. All of this lead to the dance punk of today, spearheaded by LCD Soundsystem, Death From Above 1979, The Rapture, Yeah Yeah Yeahs, and many others.
Advertisement:

A British off-shoot of this branch in the mid 2000s was "new rave.", which included such acts as Klaxons, Late Of The Pier and New Young Pony Club. It has been suggested, however, that new rave is the invention of British publication NME (and others). Indeed, it is questionable whether or not there is an appreciable difference between new rave and dance-punk.

In the Mohs Scale of Rock and Metal Hardness, they typically go to level 3 (Hot Chip, !!!)-4 (LCD Soundsystem, The Rapture), though Death From Above 1979 have been known to go up to 5.