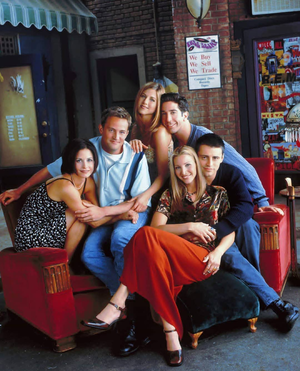 Not pictured: The fountain.note Clockwise from the left: Monica, Chandler, Rachel, Ross, Joey, Phoebe.
"So no one told you life was
Gonna be this way (clap-clap-clap-clap)
Your job's a joke, you're broke
Your love life's D.O.A.
It's like you're always stuck in second gear
Oh, when it hasn't been your day
Your week, your month, or even your year..."
— The opening verse to "I'll Be There for You" by The Rembrandts
Advertisement:

Its most iconic location was the "Central Perk" coffee shop (a joke on New York's Central Park), though most of it took place in two studio-built apartments, and it was filmed in California. It featured dozens of guest stars, including big names like the short run Bruce Willis and one-off Charlton Heston, as well as more prominent guests like Tom Selleck (who famously was somewhat hurt by how close the series regulars were and how that shut out outsiders like him).

While each episode is mostly self-contained, it was among the first prime-time comedies with an evolving status quo, something of a stepping stone to the Half-Arc Season that started becoming popular around the time that Friends debuted. Most of the cast went through several jobs, all went through plenty of love interests, and two became parents. The show was also open about, if not dedicated to, continuity, recalling and building off of events from prior episodes.

The show was also a unique long runner in that it had zero changes amongst the main cast despite the show's longevity and having a core sextet: no main character/actor left the show, nor were any added, and even with 236 episodes and the cast regularly working in film on the side, every actor appeared in every episode.

It was also more open about sex, including gay relationships, though (never among the main cast), than was usual when it first aired. Alongside Seinfeld and Sex and the City, it reshaped and was utterly iconic to American romcoms/sitcoms in The '90s. It also spawned a short-lived spin-off, Joey. A reunion special, Friends: The Reunion, aired May 27, 2021 on HBO Max.

The show was also notable in that it was almost the only one ever to demand pay equity between the male and female stars. The principal cast demanded that the three female leads get the same pay as the three male leads, the result being that Jennifer Aniston, Courteney Cox, and Lisa Kudrow were for several years the most highly paid women in Hollywood. On a similar note, the show was treated as a real ensemble; because there was no true "lead" character, the cast was always billed alphabetically,note this had a two-fold serendipitous effect where since the three women's surnames were first, they were billed first throughout its success, and when Aniston broke out as the film-star-in-waiting, she was toplining the show due to her surname starting with "A" and the cast and crew collectively agreed that for any awards submission, the actors would go into the same "Lead" or "Supporting" category, to avoid elevating one member over the others.

It also has an Idiosyncratic Episode Naming in which every episode but "The Pilot" and "The Last One" starts with "The One …" (usually "The One With…" or "The One Where…"), pre-empting what viewers would likely call them. Even the pilot was eventually later called "The One Where Monica Gets a Roommate", "The One Where It All Began", and "The First One".

The Ones with the Tropes: