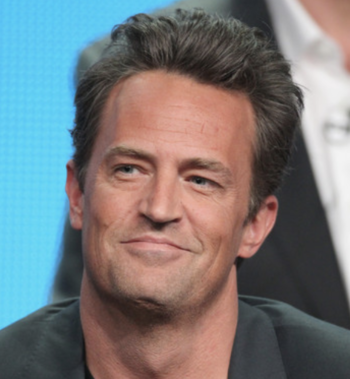 Could he be anyone but Chandler Bing?
Matthew Langford Perry (born August 19, 1969) is a Canadian-American actor best known for playing Chandler Bing in Friends. Since the nineties, he's primarily been a sitcom actor, though he has earned leading roles in movies like Fools Rush In and The Whole Nine Yards, and his guest appearances on The West Wing earned him an Emmy nomination for dramatic work. Into the 2000s, he's starred in several short-lived shows like Go On, and most recently, he played the role of Oscar Madison in the CBS sitcom The Odd Couple.
Advertisement:

He also has a single voice acting credit, playing Benny in Fallout: New Vegas. Relatedly, he had a case of carpal tunnel syndrome from playing way too much Fallout 3.

No relation to Katy Perry. Or Tyler Perry. Or 19th-century Commodore Matthew Perry. Or probably any other Perry you can think of.