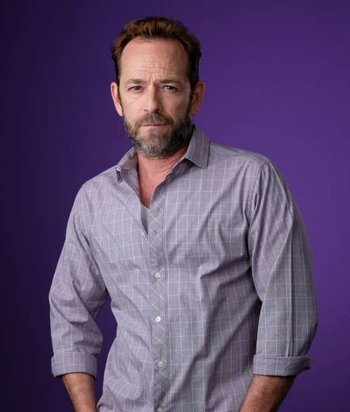 Perry was best known for his role as Dylan McKay on the FOX teen drama Beverly Hills, 90210, which he portrayed intermittently over the course of the show's original run, from 1990 to 2000. Dylan is often considered one of the best examples of the "brooding bad boy" Troubled, but Cute archetype, and Perry himself became very popular for his portrayal of the role.

During and after his time on 90210, Perry made guest frequent appearances on television, and often lent his voice to animated series like The Simpsons (as himself), Biker Mice from Mars, and Mortal Kombat: Defenders of the Realm.

In 2017, Perry returned to the world of teen dramas —this time as a teen's parent— as Fred Andrews, father of classic comic book character Archie, on The CW's Riverdale.

He remained on Riverdale until his untimely death in March 2019, dying from complications sustained after a massive stroke. His death was especially tragic for fans of the 90210 franchise, as he'd been previously announced to be appearing in a revival of the series on the same day news of his stroke broke. Prior to his death, he'd also filmed a role in Quentin Tarantino's ninth film, Once Upon a Time in Hollywood, which was released as his final performance in film or television.

Additionally, his son Jack is a professional wrestler who currently performs in All Elite Wrestling as Jungle Boy.