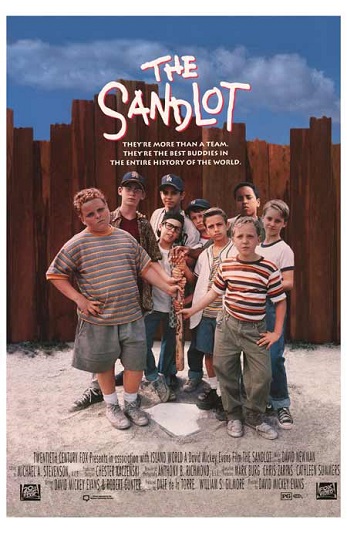 The Sandlot is a 1993 classic Coming-of-Age Story sports film, released on April 7, 1993. It was directed by David Mickey Evans, with a screenplay by Evans and Robert Gunter. It follows the summer adventures and misadventures of a group of boys and their ragtag baseball team playing on "The Sandlot," their makeshift baseball field in Los Angeles, during the summer of 1962.

Scotty Smalls (Tom Guiry) is fairly brainy but struggles with making new friends due to being uncoordinated (as he doesn't have any skill at sports) and general shyness. In addition to being The New Guy, his mother (Karen Allen) recently remarried and he isn't quite adjusted to his new step-dad Bill (Denis Leary). Watching a group of kids play at the sandlot, he is invited to join by their best player and team leader Benny Rodriguez (Mike Vitar). An outcast among the group at first, Benny guides Scotty to become a decent ball player in his own right and is accepted by the others.

As the film progresses, they learn about s'mores, crushes, friendship and that growing up doesn't always mean disaster. They are also forced to match wits with "The Beast," a vicious genetically altered dog who was locked up for killing some 170 people trying to steal from the junk yard, and now lives behind the left field fence.

Two direct-to video sequels were made thirteen years after the original had came and went: