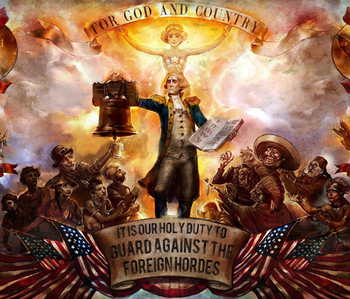 The city of Columbia welcomes you! (...Unless of course you're Jewish, Mexican, Native American, Chinese, Indian, Japanese, Irish, German (if you're Catholic, that is), Mestizo... and don't get us started on Africans, though they're welcome on one condition).
"Now here is Orsini alone with his [unfaithful] wife. [...] Orsini grabs the iron fire poker and hits his wife over the head, full force, wham, wham, dead. He drops the fire poker on her corpse and walks briskly out of the room, leaving it for the servants to clean up. Yes. That is the right thing, because this is the Renaissance, and these people are terrible. When word gets out there is concern over a possible feud, but no one ever comments that Orsini killing his wife was anything but the appropriate course. That is historicity, and the modern audience is left in genuine shock."
— Ada Palmer on "historicity"

in The Borgias vs. Borgia: Faith and Fear
Advertisement:

Sometimes, morals don't travel well. Often, what is appropriate to one culture at a given time can be repugnant to the same culture at another, or vice versa. Thus, when depicting other cultures, a creator has to choose whether to portray them accurately or not. Many just use their own contemporary culture for everyone in the story for narrative reasons or just to make writing it easier, resulting in an inaccurate and/or anachronistic story. Some, however, research the culture and make an effort to reproduce the attitudes of the time and place accurately, even when they are wildly different to what the author knows or might consider sensible. Thus one ends up with a case of Deliberate Values Dissonance.

In Historical Fiction and Historical Fantasy, this is an obvious necessity to avoid anachronisms; indeed readers may criticize works for failure to reflect the actual historically accurate views as an Anachronism Stew. This may result in an Author Tract, the story condemning or praising certain values or societal norms that are no longer relevant. Be wary, though, for sometimes Reality Is Unrealistic and the deliberately different values end up just as inaccurate, but in the opposite direction — a story could present some value as being a relic of the past even if it's still widespread at the time of its writing, or present a value as common in a specific place or time period even if it wasn't (in fact, the page quote is an example of this; murdering one's unfaithful wife with a fireplace poker was hardly universally accepted as appropriate behavior even in the Renaissance).

For Speculative Fiction this is also often a necessity, as it would make no sense for radically different societies — even if they are presented as a future version of the "present" society — to adopt exactly the same values. This can result in an Author Tract of a different kind, presenting values the author believes could or should arise in certain situations. Conversely, this could simply be a tool for Worldbuilding, especially in stories involving extraterrestrials or otherwise completely "alien" civilizations. When moral systems are so different from a reader's culture that they are almost incomprehensible, Blue-and-Orange Morality is the result.

Another way to sidestep this problem is to write a family-friendly story set in a small community with a near-homogeneous population, where controversial social or political issues never come up and in fact, can scarcely be imagined.

Often a meditation on or argument against Good Flaws, Bad Flaws. In its most exaggerated form you may get Bad is Good and Good is Bad. See also Your Normal Is Our Taboo, Unfortunate Implications, Culture Clash, No Equal-Opportunity Time Travel, Aluminum Christmas Trees. Contrast Politically Correct History, Eternal Sexual Freedom, Fair for Its Day, Culture Justifies Anything, The Theme Park Version.