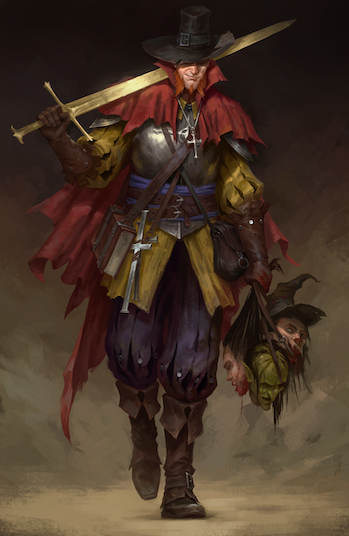 . Used with permission.
Send for the General, there's witches to burn
The day of your judgment draws nigh
In torment and torture, the bringer of pain
Disciples of Satan will die
— Saxon, "Witchfinder General"
Advertisement:

Let's say you live in a fantasy setting, but no, you aren't having it easy. This ain't no happy-singing-rainbows-and-fairies kind of fantasy you've got here, and there's a problem. Perhaps the resident wizard isn't too much into helping upstart heroes, or something has to be done with that "persecuted religious community" at the corner before you run out of virgins. Or it could even be something a bit more mundane: maybe the local count thinks the mole on that kindly old lady's chin is really gross.

Who you gonna call? This guy.

The Witch Hunter is the grim, broody, badass-longcoated, and nice-hatted guy who is always prepared to lead a Witch Hunt, but beware, for this guy, as much as he is well intentioned and soul-saving, often leaves that pesky sort-them-out trade to the Lord, and he tends to be a bit creepy about his principles. He can be seen handing out the Torches and Pitchforks, and "Burn the Witch!" is his favourite solution. Due to these traits, a witch hunter is usually a perpetrator of Van Helsing Hate Crimes either out of genuine hatred, or mere cruelty and profit; thus, when the Witch Hunter appears, he is usually a villain or (in settings where witches are actually evil by default) a very dark Anti-Hero.

While we are at it, Van Helsing, the Trope Namer for one of the above-mentioned tropes, hunted vampires instead of witches, but even the standard ones are rarely above an occasional hunt after a vicious vampire or demon. That said, witches generally have different connotations than most other classic monsters, due to the uncomfortable reality of historical witch hunts, which killed a lot of innocent people. Vampires and werewolves don't have that same historical baggage, and although you may the occasional Friendly Neighborhood Vampire or heroic werewolf who is able to Resist the Beast, they're still a lot more likely to be cast as Always Chaotic Evil monsters. Therefore, the Vampire Hunter is typically a relatively uncomplicated hero in a way that the Witch Hunter is not.

A witch hunter may receive supernatural help, whether from angelic or divine patrons or from being some sort of Half-Human Hybrid — this often takes the form of Religion Is Magic or Holy Burns Evil. However, most of them are plain, baseline humans, which in stories where magic is real and their foes really are magic users, makes them Badass Normal. Having said that, for a witch hunter to operate, magic isn't really needed — its appearance just makes the difference between being a harsh, but possibly (depending on the role of magic in the work and the story's cynicism) needed protector from supernatural threats, and a fanatic with few redeeming features (if any at all).

An Anti-Magical Faction is often filled with these.

A whole religion made of these guys is a Church Militant, but they don't actually have to be ordained, or even a part of church structure. When they are, they are usually part of a Church Police. While some of them were specifically trained to perform their duties, they tend to be freelancers, working alone or within a small team (institutionalized witch-hunting is a slightly different matter in trope terms). Since they often face the need to investigate the nature of the threat before dealing with it, many are more than a bit of an Occult Detective, and, of course, the Witch Hunter is quite a case of the Hunter of Monsters, especially if he also goes after supernatural monsters. If a witch hunter is also adept at using magic, and lives in a more modern or contemporary setting, he may be a Blue-Collar Warlock.

Subtly differs from Mage Killer: a Mage Killer is empowered to be resistant to magic and/or especially powerful against magic-users, while a Witch Hunter is ideologically opposed to their very existence (whether they really exist or not), and believes that Magic Is Evil. The two can overlap — maybe a Mage Killer chose that path because of a grudge against mages, or maybe a Witch Hunter stocks up on Depleted Phlebotinum Shells and Anti-Magic wards as a professional necessity. They may even exist independently of each other, depending on the setting's treatment of Unequal Rites.