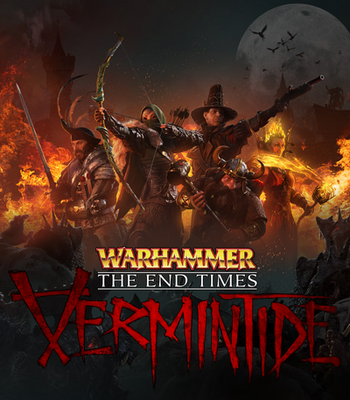 Together to the End
The world is ending, though few believe it. The Chaos Gods, the Dark Brothers, tire of their Great Game. Now they seek to sweep the board clean with fire and blood. For centuries, the Empire has held firm against its enemies. Mankind has encountered no foe that steel could not tame, or whom walls could not hold. At least, that is what they taught. No one spoke of the ancient enemy now rising from beneath, and no one will be left to tell the tale... unless you can stem the Vermintide.
Opening movie
Advertisement:

The End Times: Vermintide is a first person video game adaptation of Warhammer Fantasy, set during the apocalyptic Warhammer: The End Times setting. The game is developed by Fatshark, and was released for the PC on October 23, 2015, with PS4 and Xbox One releases in early 2016.

The game takes place in the Empire city of Ubersreik, which is under attack by an enormous horde of Skaven (though zones can also take place in the outskirts of the city). The players can choose four out of five available characters; all whom are attempting to save the city from the under menace.

The game currently consists of a twenty-one map adventure mode (with eight being DLC) and a Last Stand mode, both with five ranges of difficulties to choose from. All of these can be played either solo with AI Bots, or cooperatively with both friends and strangers. It makes absolutely zero apologies for being heavily inspired by Left 4 Dead, so anyone a fan of L4D will most likely enjoy Vermintide.

The sequel, Warhammer: Vermintide II, was released in 2018.