You All Meet in an Inn 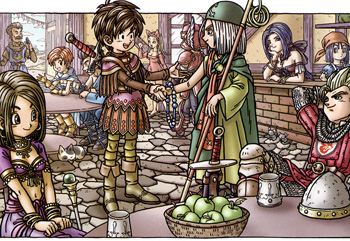 Another good reason not to use the drive-thru.
Elan: Next, we go to the tavern.
Roy: Why? I need adventurers, not a drink. Well, not JUST a drink.
Elan: That's where adventurers are hired, silly!
Roy: Why? It's not like they're looking for jobs on the wait staff.
Elan: I dunno, it's just tradition.
— The Order of the Stick: On the Origins of PCs
Advertisement:

The stereotypical opening to an adventure in tabletop RPGs: the protagonists are all gathered by prior intent or a "coincidence" of authorial fiat by the Game Master in an inn, bar room, or other common public meeting spot. Once there, Messenger some mysterious stranger or NPC of varying dubiousness will approach them with some job offer or plea for assistance. These strangers tend to seat themselves in the darkest corner of the tavern for some reason (probably to make themselves seem even more mysterious). Thus do our heroes receive their ticket to board the plot.

Careful, though, for the mysterious stranger has an odds-to-even chance of being the Big Bad or a similar miscreant. Expect a Bar Brawl or two in the tavern as well, particularly if the PCs start to get rowdy. Fortunately, though, the barkeep is usually a retired former adventurer willing and able to kick the asses of anyone who gets too uppity.

This trope is Older Than Print — no less an author than Chaucer had his adventuring party meet in an inn — but it later began to be considered a Discredited Trope through overuse. Actually starting an adventure with the words "So, you all meet in an inn..." may be seen as roleplaying's equivalent to "It Was a Dark and Stormy Night..." Thus, a lot of sources advise against using it, and give pointers on how to avoid it. The 3rd Edition Dungeon Master's Guide for Dungeons & Dragons, in a list of ways to bring a party together, dubs this "The Cliche". David Morgan-Mar, of Irregular Webcomic! and Darths & Droids fame, provides a list of less overused ways

to start an adventure, as do the folks at the dice of doom blog.

On the other hand, cliched as it may be, it really is a logical opener. Taverns are the center of social life in many cultures, making for a good place to meet new people, and food and drink are good for bonding with new acquaintances. Some people even use the trope deliberately as an invocation of gaming tradition. It's also quite easy to play for laughs, emphasizing the comedy potential of enjoying a few pints down at the pub and deciding to go out and slay a dragon with your new-found acquaintances.

Real Life group meetings at an inn are usually a convention of some description. The "adventuring" usually takes place entirely within the building, and does not normally involve bloodshed, swordplay or dragons. Normally.

Compare You All Meet in a Cell. Contrast Closed Circle, for when the DM wants to keep you in the tavern.