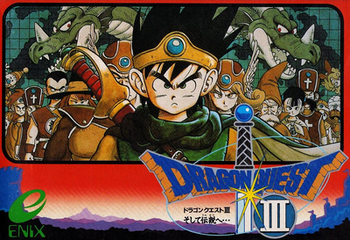 Dragon Quest III: The Seeds of Salvation (originally named Dragon Warrior III in its initial North American release on the NES) rounds out the original Dragon Quest trilogy by casting the player as the child of the hero Ortega, who…didn't quite finish his grand journey to slay the evil Baramos. So, now that you're sixteen, everyone expects you to pick up where he left off and get to slaying the villain! Thankfully, you're not expected to do this alone: The local tavern serves as an excellent adventurers' hub, where you can recruit a number of loyal party members, ranging from warriors to wizards and even jesters.

III was a mega hit in Japan; so much so that people were actually mugged on the street for their copies, something which just didn't happen with video games back then. The insane amount of hype surrounding it wasn't totally unfounded: Though Dragon Quest II introduced the concept of multiple-character parties to most gamers of the time, it was restrictive to the point that some people complained directly to Enix themselves. In response to that outcry, Dragon Quest III invented the Job System (which would recur in various Dragon Quest entries), allowing you to customize your party to some degree. You could also pick everyone's gender, meaning that if you wanted to compose a team of amazons, nothing was stopping you...and female characters got to enjoy a few benefits denied to their male counterparts.

And thus, at this juncture, it needs to be emphasized, especially for our younger readers: Dragon Quest III is quite possibly THE single most influential and important Japanese game of all time. Its vast popularity meant it was endlessly-imitated or served as inspiration for other games and their mechanics, either to improve on or challenge parts of the design tenets it laid out. The influence of the game on the JRPG, and subsequently the overall gaming industry, in Japan cannot be overstated. It still has an outsized place in the Japanese cultural zeitgeist: When non-video game media references a JRPG, 99% of the time, it'll be Dragon Quest III (and the remaining 1% will be another game in the series!). Of course, other video games directly reference it all the time. The only games that can be argued to command remotely the same mindshare, both in game industry influence and cultural presence, are the Famicom Super Mario Bros., Pokémon Red and Blue, and more recently, Puzzle & Dragons—and even then, the latter two owe more than a little to Dragon Quest.

In short, this is a historically-significant game, and if you're interested in the evolution of video games, you should probably be familiar with it.

The game has had a substantial release history. First released for the Famicom in 1988, it was ported to the North American NES in early 1992, which is part of the reason why it wasn't as influential in the west. It received a substantial remake in '96 for the Super Famicom which never got exported. It was then ported to the Game Boy Color in late 2000, with the Anglo world getting a release some months later. Finally, the Super Famicom version got ported to Japanese feature phones in 2009, which wasn't released elsewhere due to differences in phone capacity at the time; however, this version was ported again to iOS and Android smartphones in 2014, and the Nintendo Switch in 2019, with an English option to boot, to much acclaim. On May 26, 2021, to celebrate the franchise's 35th Anniversary, it was announced that this game would get a remake that's part of the "HD-2D" series (the same series consisting of Octopath Traveler and the upcoming Triangle Strategy), with a planned worldwide release on home consoles.