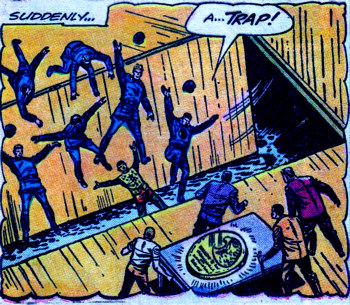 The trap door is an easily activated door in the floor of the Supervillain Lair, activated by a convenient switch or lever. Though a favorite of the Diabolical Mastermind, it might also be installed in the office of a Corrupt Corporate Executive. Somehow the hero (or minion who has disappointed the Big Bad) will always be sitting or standing exactly where the trap door opens, where it will usually lead to the Death Trap. If generous, the trap door will include a slide, otherwise it's just a drop.

And somehow, the seams around the trap are always invisible before it opens and after it closes. This is easier to do in animation, of course, unless it's given away by a Conspicuously Light Patch.

Mostly spoofed these days, often with a pun so old it creaks; "Nice of you to drop in!" Also often subverted by Trap-Door Fail — having the would-be victim end up standing next to the trapdoor when it opens.

For its intentional use on some game shows, see some of the examples of Eject the Loser.

Not to be confused with the series about one of these working in reverse.