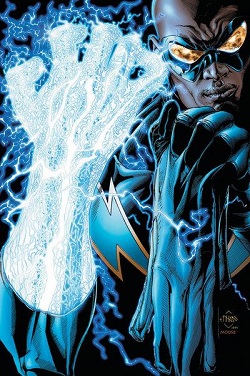 Gimme gimme shock treatment.
"Justice, like lightning, should ever appear
to some men hope, and to other men, fear!"
Advertisement:

Black Lightning was DC Comics' first black superhero with his own series. He was created by Tony Isabella with Trevor von Eeden and debuted in Black Lightning #1 (April, 1977), although his series only lasted a year before falling victim to a mass cutback that resulted in twenty DC titles being cancelled. He continued to make guest appearances, was a founding member of Batman and the Outsiders, and served with the Justice League of America. He got another series of his own in the 1990s, again written by Tony Isabella (with Eddy Newell doing the art), which lasted slightly longer than the first one had. In 2009, Jen Van Meter wrote a modern retelling of the 70s series called Black Lightning: Year One. Isabella returned again in 2018 to write the miniseries Black Lightning: Cold Dead Hands.

Black Lightning is Jefferson Pierce, who grew up in a slum in Metropolis, made good as an athlete, and returned to his old neighborhood to teach at the high school and help the next generation make something of themselves. (Some stories replace Metropolis with Cleveland, OH, the home of both Isabella and the creators of Metropolis, Siegel and Shuster). Finding the neighborhood in the grip of organized crime, he became a costumed superhero equipped with a belt that gave him electrical powers. Later in his career, as so often happens, he developed the ability to manifest the powers without the belt.

Black Lightning did not appear in any other media for many years, with DC on several occasions choosing to create a new character where they might have used him (e.g. Black Vulcan in Superfriends and Soul Power in an episode of Static Shock). This changed when the Outsiders appeared in Batman: The Brave and the Bold. Since then he has also appeared in the animated movies Superman/Batman: Public Enemies and Justice League: Crisis on Two Earths, the DC Universe Online video game, in a series of shorts for the DC Nation block (alongside his two daughters, Thunder and Lightning), and in the second season of Young Justice as a member of the Justice League who eventually offers to become the mentor of Static (who was ironically replacing Black Vulcan), and in the third season, titled Outsiders, would become an Ascended Extra as a member of the titular Outsiders, going from a minor character to part of the main cast.

A live-action television series featuring the character began airing on The CW in 2018, where he's played by Cress Williams. Black Lightning appears as a premiere skin for Raiden in Injustice 2.