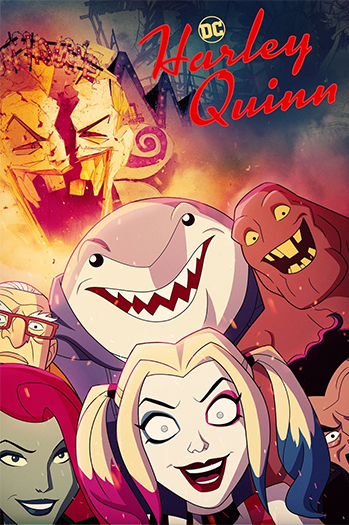 "I love my logo."
Ivy: Uh, I think they're gonna hate it, Harls.
Harley: No way! It's got comedy, action, incredibly gratuitous violence, and unlike that Deadpool cartoon, it's actually coming out!
Advertisement:

Harley Quinn is an adult-oriented animated series based on the DC Comics character of the same name, developed by Justin Halpern, Patrick Schumacker, and Dean Lorey (Powerless). Loosely adapting the New 52 run by Jimmy Palmiotti & Amanda Conner, it stars Harley Quinn (Kaley Cuoco) after she has split from The Joker (Alan Tudyk) for good and sets out to become the new queenpin of Gotham. Joining her are her best friend Poison Ivy (Lake Bell), their fellow supervillains Clayface (Tudyk), King Shark (Ron Funches), and Doctor Psycho (Tony Hale), and her landlord Sy Borgman (Jason Alexander).

It was one of the first original series to be announced for DC's streaming service DC Universe, alongside Young Justice: Outsiders, Titans, and Swamp Thing. After two seasons on DC Universe, it was announced in September 2020 that the show would be moving to HBO Max for its third season, as a result of the former's planned rebranding as a digital comics reader without the streaming video component. Season 3 is scheduled to release in July 2022.

In April 2022, a spin-off series titled Noonan’s was ordered

by HBO Max. Early plot details indicate that the series will follow Kite-Man (Hell yeah!) as he takes over the titular Gotham bar that serves as a popular hang out for the city’s criminals.

Also has a Recap page.

Tropes shown in this work: 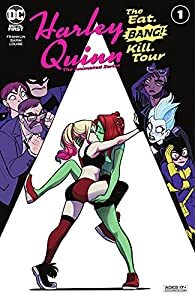 It's got action, romance and everything in between.
Feedback

Poison Ivy lets Kiteman's parents know how much they are full of crap.

Poison Ivy lets Kiteman's parents know how much they are full of crap.