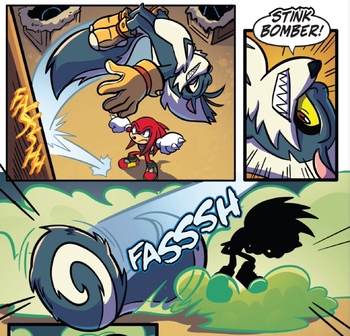 Since Rough is a Smelly Skunk and playing it for all it's worth... Knuckles might need a gas mask to fight him.
"Now, feel the steam of my horrible body odor."
— Filthy Phil, SpongeBob SquarePants, "Karate Island"
Advertisement:

One of the more unorthodox methods of attack in fiction is using the body's foul musk to disorient or incapacitate the opponent. This typically comes in the form of bad breath, foul body odor (usually from the armpits) or the ability to exude a repugnant stench as a superpower. A character smearing themselves in something that smells really bad also qualifies.

One can expect an evil character to do this, possibly as a torture method.

The Pig-Pen will often have this kind of ability. Often represented as a Visible Odor.

Super-Trope to Fartillery. See Stink Bomb for when a weapon has this attribute. See also Smelly Skunk.