Grow Old with Me 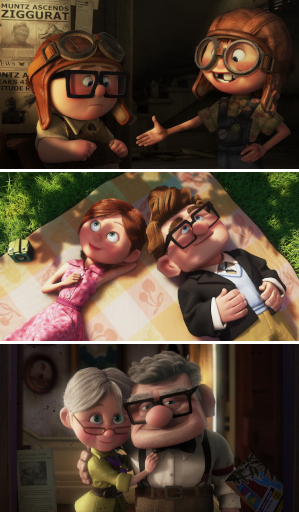 "Thanks for the adventure... Now go have a new one!"
"Oh, they say that I'm feeble with age, Maggie; my steps are much slower than then.
My face is a well written page, Maggie, and time all along was the pen.
Oh, they say that we've outlived our time, Maggie, as dated as songs that we've sung,
But to me, you're as fair as you were, Maggie, when you and I were young."
— "When You and I Were Young, Maggie"

, as performed by Kilbrannan (original lyrics by George Washington Johnson

Grow old along with me. The best is yet to be.

This trope is when a romantic couple is depicted going on into their golden years. If mortality or mental illness is a theme, this is a sure recipe for tear jerkers aplenty. (Expect a chance of Together in Death, for instance.)

May combine with Babies Ever After by also depicting their descendants, who are often numerous.

Bertie has a nightmarish imagine spot.

Bertie has a nightmarish imagine spot.