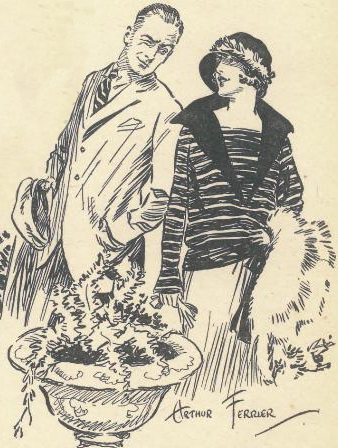 "Two young adventurers for hire. Willing to do anything, go anywhere. Pay must be good. No unreasonable offer refused."
Advertisement:

Tommy and Tuppence Beresford are the protagonists of a series of novels and short stories by Agatha Christie, and mark the few ventures that Christie made into espionage tales rather than the whodunits she's known for. They're far less famous than their mystery-solving counterparts Hercule Poirot and Miss Marple.

Appearing in Christie's second novel, The Secret Adversary, Thomas Beresford and Prudence "Tuppence" Cowley started out as friends in post-World War I Britain. Jobless and penniless, they make plans to place an ad in the paper marketing themselves as adventurers, leading to an encounter that starts their career as spies for an unnamed British intelligence agency. From there, they were revisited by Christie from time to time, and again, unlike Poirot and Marple, aged in real-time as Christie did, starting out as energetic twenty-somethings in The Secret Adversary and ending up as retired grandparents in their twilight years in Postern of Fate. Postern is also notable as the final novel Christie ever wrote, though not published. They were often referred to by Christie as "bright young things" and she is said to have enjoyed writing their stories the most.

Interestingly, the dedications of two Tommy and Tuppence books (The Secret Adversary and By the Pricking of My Thumbs) are the only times Christie ever dedicated a book directly to her readers.

The Tommy and Tuppence books are:

There was a live-action adaptation revolving around Tommy and Tuppence produced by London Weekend Television in 1983 of The Secret Adversary and several stories from Partners in Crime, featuring James Warwick as Tommy and Francesca Annis as Tuppence. The series was released in the United States as part of the PBS anthology series Mystery!

Other various live-action adaptions have been done as part of other Agatha Christie-based series such as Marple.

BBC adaptions of The Secret Adversary and N or M?, but confusingly titled Partners in Crime note There are no adaptions of any of the short stories from that collection and starring David Walliams and Jessica Raine aired in 2015. The adaptation this time around portrays them as an established middle-aged couple (circa N or M?) indulging in amateur espionage rather than the youthful spies of the earlier books, and moves the setting for both to the 1950s-era Cold War.

Tommy and Tuppence's stories and novels provide examples of: