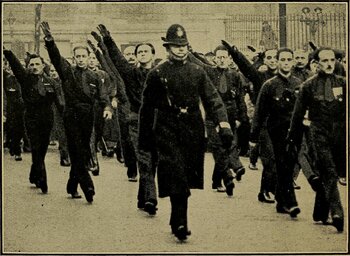 Black Shirts are closet Evil Minions yearning for the day the villain brings about his Empire of Evil. In the meantime, they'll complain about the current "decadent and corrupt" government to anyone who won't roll their eyes and to some people who will. Once the villain starts recruiting, these guys are in line before Les Collaborateurs have finished breakfast.

The threat that Black Shirts represent is a latent one. While they're harmless on their own or in peacetime, they quickly organize into a formidable force in service of the Big Bad. Heroes are nominally obliged not to kill them, but even the Messianic Archetype would be hard-pressed to make them turn to the side of good. What's more, they completely agree with the Evil Overlord's agenda, no matter how cruel, inhuman or insane — even if it means that they'll end up dying themselves by its conclusion (a fact they usually ignore). While Les Collaborateurs are greedy enough that they can be bribed into helping the good guys, Black Shirts do it for fanaticism and can't be swayed by mere money. Against them, only force will ultimately stop them and you'll know they'll show no mercy in a heartbeat if they think they can get away with it, so get ready to get tough with them.

They frequently serve the fairly useful purpose of explaining just how the villain got so much support overnight (namely, it was always there, the villain just managed to lead them) and, on the other hand, add a bit of Fridge Horror to a happy ending — unless they have been all killed or otherwise had their minds changed, the villain's ideology is still viable in the setting...

. The Nazis did the same thing with brown shirted SA (who then fell out of favor and were purged by the black-clad SS after the Nazis took power, the SS were then favored by the regime until its end), and one American fascist movement wore silver shirts. A variety of other lesser-known fascist movements also copied this pattern of wearing a uniform with a specific color shirt that became the nickname of their followers, such as the blueshirts of the somehow even more ineffectual first attempt at British fascism

and the greenshirts of the Romanian Iron Guard

(who like the Nazi brownshirts were disposed of or fell out of favor once no longer useful to the fascist dictatorship). Needless to say, this trope is Truth in Television, since every distasteful ideology has always had followers, and of course, uniforms are a very easy way of enforcing conformity, as practically any organized group from store employees to the Boy Scouts to, y'know, armies can attest to.note This is not to equate any of these latter groups with any of the former, just in case that got interpreted poorly. Just to make it confusing, black shirts are also a popular choice for anti-fascist groups.

Also see The Quisling, Day of the Jackboot and Secret Police.

Unrelated to Red Shirt and Mauve Shirt, though legions of Black Shirts can make useful Mooks for Cannon Fodder.