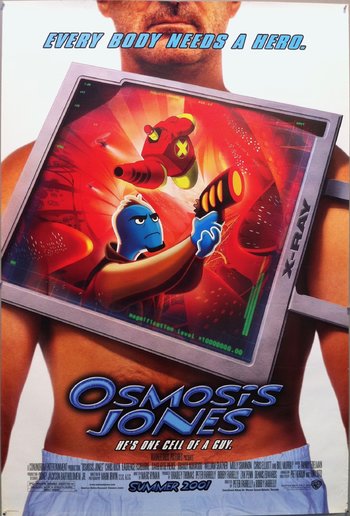 He's one cell of a guy, and his partner's a real pill.
"Every body needs a hero."
— Tagline
Advertisement:

2001's Osmosis Jones is a Buddy Cop Movie featuring Chris Rock and David Hyde Pierce. The two are paired up to stop a nasty criminal (played by Laurence Fishburne) from destroying their beloved city, hindered by the self-centered mayor Phlegmming (William Shatner), whose assistant (R&B singer Brandy) is the main love interest.

Also, this all takes place inside a human body.

Osmosis Jones (Chris Rock) is a white blood cell cop who lost his reputation after a nasty incident that ruined Frank DeTorre (the human this movie takes place in, played by Bill Murray) out in the real world. Frank eats a contaminated egg that carried a deadly virus by the name of Thrax (Laurence Fishburne), whose goal is to kill Frank within 48 hours.

After Thrax starts doing some damage, Osmosis is paired up with a cold pill named Drix (David Hyde Pierce). The two clash frequently, as most new cop partners do in movies, until Drix sees Thrax himself, and takes Ozzy's side.

Meanwhile, while all this is happening in the animated world of the City of Frank, we get a few peeks at what Frank is going through, in the live-action sequences of the movie, trying to care for his health-conscious daughter Shane.

One of the two animation directors was Tom Sito, who had previously been a lead animator on another, more successful live action/animation hybrid film.