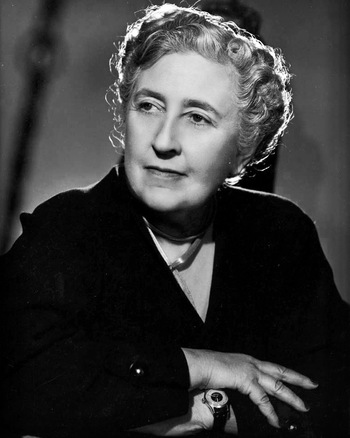 "Time is the best killer."
Donna: Agatha, people love your books, they really do, they're gonna be reading them for years to come.
Agatha: If only! Try as I might it's hardly great literature, now that's beyond me. I'm afraid my books will be forgotten, like ephemera.
— Doctor Who, "The Unicorn and the Wasp"
Advertisement:

Dame Agatha Mary Clarissa Christie (15 September 1890 – 12 January 1976) was the Queen of English Mystery Fiction, ranked with Arthur Conan Doyle as the greatest mystery writer of all time. Her stories might perhaps be best described as elaborately-plotted puzzles, full of false identities and faked deaths. She enjoyed a very long career; her first novel, The Mysterious Affair at Styles, was published in 1920, while her final novel, Sleeping Murder, was published posthumously in 1976. Among the best-selling authors of all timenote The Guinness Book says she's sold more books than any other individual author. If you count shorter works, William Shakespeare takes the lead. If corporations are invited, the collected works of Walt Disney Productions top the list. Regardless, she's sold three billion copies in over 100 languages. As of 2020, Christie still holds the top spot among the most-translated authors

Her principal detectives were:

Christie also wrote 16 novels which did not feature any of her series detectives. These ranged from traditional mysteries with one-shot detectives to Thrillers which placed more emphasis on action than detection. The latter were almost universally the most poorly received of Christie's works, while one of the former, And Then There Were None, is widely regarded as one of her best, even the best. Six of her novels, which are usually classed as Romances, were written under the pseudonym Mary Westmacott.

While most of the stories are nominally set in the year of publication, in practice they all take place in the time of the Genteel Interbellum Setting. Of Christie's series detectives, only the Beresfords age in real time. Poirot and Marple both begin as elderly characters and over the course of Christie's 56-year career, age roughly 20 years at most. (This matches a line from the final Poirot novel Curtain, in which it is stated that it has been "over twenty years" since the first adventure — the aforementioned Mysterious Affair at Styles, which came out in 1920 and was set during World War I.)

Personality-wise, she was extremely introverted and secretive, sometimes probably even drawing amusement from it. It is really indicative of her character that at the end of her play The Mousetrap, the viewers are specifically asked not to spoil the ending to outsiders — Christie possessed an uncanny ability to subvert the reader's expectations. Being well aware of the mystery conventions of the time, she was frequently able to subvert them for a Twist Ending. For example, Christie knew that there were certain characters, who by virtue of their role in the story, the reader would not suspect. To drive home the point that the reader should suspect everybody, she would frequently make one of these characters the murderer. For example:

Note that Christie invented most of the above twist endings.

For a complete Christie bibliography, including novels, short stories, and stage plays, see this page. Most of the books in the main series have been televised, many filmed, some repeatedly. There's even an anime Crossover of Poirot and Miss Marple.

Works by Agatha Christie which have their own pages

Other works by Agatha Christie include examples of: