Literature / Death in the Clouds 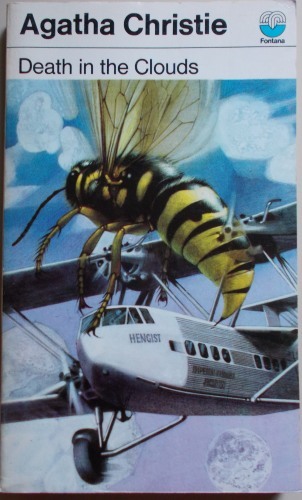 Death in the Clouds is a detective fiction murder mystery by Agatha Christie first published in 1935, featuring Hercule Poirot.

Poirot is flying from Paris back to England, and spends most of the flight sleeping. As the plane nears landing, fellow passenger Madame Giselle, a moneylender, is discovered to be dead. Although a wasp was found in the compartment shortly earlier, Poirot discovers a poisoned dart, and police find a blowpipe next to his seat. He finds himself counted among the suspects, and decides to investigate the case himself, promptly requesting a list of the passengers' possessions, and working with inspectors in both England and France. This results in revelations surrounding Giselle and the other passengers, involving debts, blackmail, a secret marriage and a previously unidentified estranged daughter.

Death in the Clouds was adapted for the television series Poirot in 1992, starring David Suchet. Tropes concerning the adaptation can be found on the page for the series.