Literature / The Day of the Locust 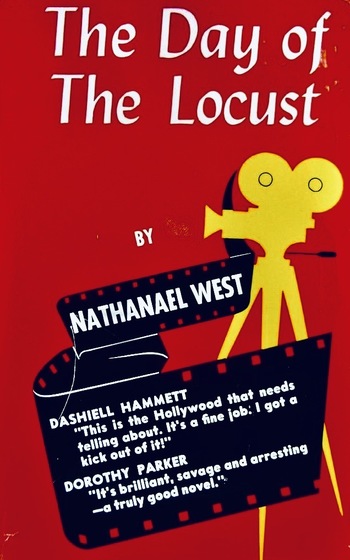 "It is hard to laugh at the need for beauty and romance, no matter how tasteless, even horrible, the results of that need are. But it is easy to sigh. Few things are sadder than the truly monstrous."
Advertisement:

The Day of the Locust is a darkly satirical 1939 novel by Nathanael West that tells a story of Horrible Hollywood as seen through the eyes of Tod Hackett, a graduate of the Yale School of Fine Arts who has come to Los Angeles to work as a scenery painter while creating an ambitious painting entitled The Burning of Los Angeles in his spare time.

Tod lives upstairs from aspiring actress Faye Greener, who has the good looks for stardom but lacks the talent to even be reliably cast as an extra; Tod falls for her, but her shallow Gold Digger attitude toward romantic relationships leaves her unable to reciprocate, and his love turns to a dark obsession. Her father, Harry, is a washed-up former vaudeville clown in declining health who works as a door-to-door salesman, mostly as an outlet to keep performing in front of a captive audience. Tod's other acquaintances include the acerbic screenwriter Claude Estee, his only connection to the more glamorous side of the industry; "Honest" Abe Kusich, a little person bookmaker; Earle Shoop, a dimwitted cowboy and occasional bit part actor in Westerns; Miguel, a Mexican friend of Earle's who trains fighting cockerels; sexually repressed accountant Homer Simpson, who has come out to Los Angeles from Iowa at his doctor's advice; and androgynous Enfant Terrible Adore Loomis, whose mother is hell-bent on making him a child star but who is himself hell-bent on raising hell.

This novel and film contain examples of the following tropes:

Alternative Title(s): The Day Of The Locust