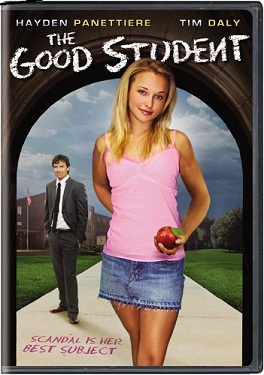 That guy in the back? Yeah, that's the lead.
"When released, Warwick Davis (of Willow and 'third Ewok from the left' fame) was the closest thing Leprechaun had to an actual celebrity... Less than a year later, their token eye candy actress Jennifer Aniston made good and landed a network sitcom. The show was kind of a hit, and by the final season of Friends, Aniston was earning the entire budget of Leprechaun per episode. On the new DVD cover, she finally got co-billing with the midget in scare makeup and tights."
— Cracked, "5 Ways Hollywood Tricks You Into Seeing Bad Movies"

The tendency of a film to be retroactively linked in the public mind with the biggest name in the film or be marketed as "starring" the biggest name, even if that actor is not the main character (at least from the filmmakers' point of view), and occasionally even if his or her character is very minor indeed.

There are several reasons why this might happen: drumming up a newly famous actor to help advertise the movie, a famous actor given a supporting role (Stunt Casting) to help sell the movie, or a secondary or supporting role gaining more hype than the main role which requires a change in publicity (Ensemble Dark Horse). Sometimes the actual lead actor gets an "And Starring" credit. In extreme cases the actor playing the principal character isn't even mentioned on the poster.

A variation is caused by the repackaging of an older movie with a then obscure, now famous actor prominently advertised. This happened to Satisfaction (1988) which, after Pretty Woman made her famous, was repackaged as Girls of Summer "starring" Julia Roberts and featuring a small appearance by Justine Bateman (who, for those who don't get the joke, was in 1988 a major figure as a co-star in Family Ties but is today better known as Jason's sister) as the lead character.

Seeing as this is becoming very common, only include examples of where the role is substantially smaller than the actor's billing would suggest, not just where they're not the main protagonist. In an Ensemble feature, this is partially justified provided they are part of the main ensemble and not just a cameo.

In music, it is not uncommon for certain songs to be more associated with a featured guest singer than its official lead artist. Common causes for this include the lead artist being a producer or instrumentalist whereas the guest is providing vocals, a rap song whose chorus is sung by a superstar guest, or just the guest artist being so much more famous than the lead.

Compare Billed Above the Title, Spotlight-Stealing Title, and Wolverine Publicity, where a popular character is deliberately added for the sole purpose of selling a product, whether or not the character is actually relevant to the story. Also compare Award Category Fraud, where a minor role is given an award for a major one, or vice versa.