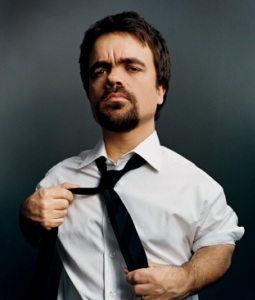 "I feel really lucky, although I hate that word — lucky. It cheapens a lot of hard work. Living in Brooklyn in an apartment without any heat and paying for dinner at the bodega with dimes — I don’t think I felt myself lucky back then, doing plays for fifty bucks and trying to be true to myself as an artist and turning down commercials where they wanted a leprechaun. Saying I was lucky negates the hard work I put in and spits on that guy who’s freezing his ass off back in Brooklyn. So I won’t say I’m lucky. I’m fortunate enough to find or attract very talented people. For some reason I found them, and they found me."
Advertisement:

Peter Hayden Dinklage (born June 11, 1969) is an American actor with achondroplasia, the most common form of dwarfism ("regular" sized head and torso, shortened arms and legs).

His breakout role was Finbar McBride in The Station Agent, and he has also appeared in such films as Elf and Death at a Funeral (both versions) and series such as Nip/Tuck. From 2011 to 2019, he played Tyrion Lannister in the HBO series Game of Thrones, winning near-universal acclaim for his performance. He won four Emmy Awards for Outstanding Supporting Actor in a Drama Series for his portrayal of the character, along with numerous other awards and nominations. In 2014, he appeared as the villain Bolivar Trask in the movie X-Men: Days of Future Past, and as your companion AI "Ghost" in the video game Destiny. note  The part was later replaced with Nolan North.

In addition to supporting causes related to dwarfism, Dinklage is a well known vegetarian and campaigner for animal rights, narrating PETA videos such as this one

Fun fact: he is actually related to the German noble family Dincklage, which can be traced back to 1231.

Example of:
Little People Are Surreal