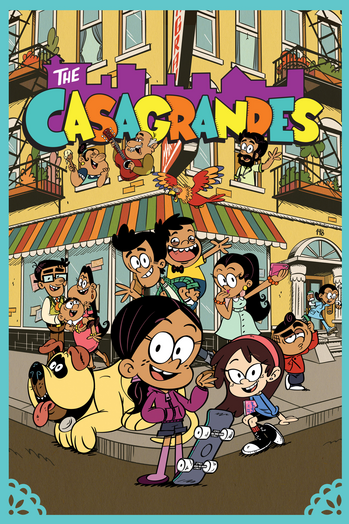 The Casagrandes is a Spin-Off series of the hit Nickelodeon cartoon The Loud House. The last show of the Nicktoons brand to debut in the 2010s, the series was originally announced as being in development

in March 2018, before being officially greenlit in July 2018. The series premiered on October 14, 2019 and is executive produced by Mike Rubiner, who served as story editor on The Loud House prior to becoming showrunner on both productions.

After moving from the suburban town of Royal Woods, Michigan to the larger metropolis that is Great Lakes City, Ronnie Anne Santiago and her family now find themselves adjusting to life in the big city alongside their extended family, the titular Casagrandes. In addition to getting used to her large new family, Ronnie Anne finds herself making new friends such as fellow apartment dweller Sid Chang, and getting into misadventures just as silly as those back in her old stomping grounds.

Before the show's premiere, several episodes of The Loud House had featured the show's cast. "The Loudest Mission: Relative Chaos" introduced the main family; "City Slickers" introduced Ronnie Anne's city friends Casey, Sameer and Nikki; "The Spies Who Loved Me" focused on them; and "The Loudest Thanksgiving" featured them and the Loud family having Thanksgiving dinner together. In addition to all this, the fourth season of The Loud House began with a dedicated five-episode miniseries, wherein each segment used a "...With the Casagrandes" naming convention.

The premiere episode, "Going Overboard", was uploaded to YouTube ahead of the show's premiere, and can be viewed here

for a second Season which premiered October 9, 2020. On September 24, the show was renewed

for Season 3 which premiered September 17, 2021. On February 17, 2022, it was announced the spin-off was cancelled and will not be returning for a fourth season.

The Casagrandes provides examples of: