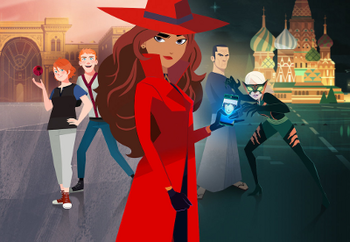 Who is Carmen Sandiego?note  Left to right: Ivy holding Red Drone, Zack, Carmen Sandiego, Shadowsan, Tigress
"I realized that stealing isn't a game. It does harm people... especially when you're willing to steal lives."
— Carmen Sandiego

Carmen Sandiego is a Continuity Reboot of the long-running educational game and TV show franchise, with a big twist to the formula: this time Carmen (Gina Rodriguez) is the hero, turning against V.I.L.E. after growing disillusioned with their willingness to hurt or kill people, and attempting to beat them to any artifacts they plan to steal. Assisting her as always is The Player (Finn Wolfhard) who acts as Mission Control from his computer.

The series premiered worldwide on January 18, 2019 on Netflix, and it consists of 32 episodes.

You can watch the first season trailer here

. The season two trailer can be seen here.

An interactive special titled Carmen Sandiego: To Steal or Not to Steal was released on Netflix on March 10, 2020. The special's trailer can be seen here.

Netflix has announced it's also making a live action film with Rodriguez reprising the role, though it isn't clear if it will actually be in the same continuity.

There are also some tie-in books and graphic novels.

By getting the Good Ending in the interactive special, you are rewarded with a scene of the supporting cast, singing the original Rockapella: "Where in The World is Carmen Sandiego," song.

By getting the Good Ending in the interactive special, you are rewarded with a scene of the supporting cast, singing the original Rockapella: "Where in The World is Carmen Sandiego," song.