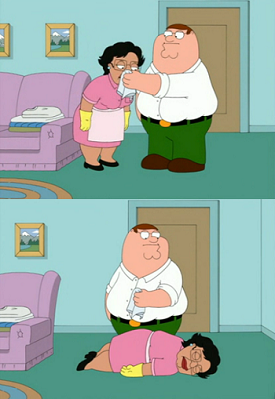 A character is drugged and goes out like a light in just a few seconds. Just as often, they wake up in short order, groggy but otherwise none the worse for the experience. Delivery methods can vary, from gas, to darts, to controlled injection, to a liquid added to food or drink. The ranged attack version is effectively a subtrope of Stun Gun.

This is Artistic License – Medicine in the extreme. In Real Life, drugs can take anywhere from a few seconds (as with inhaled sedatives and anesthetics used in surgery) to several minutes (as with intramuscular injections of many animal tranquilizers, as frequently observed in wildlife documentaries) to several hours (as with sedatives that are administered in food or drink) to take full effect. Similarly, dosage matters; the amount required to sedate a muscular man or a large animal would kill a smaller person, and a dose safe for a normal person might barely faze The Big Guy. There is a reason why surgeries requiring full general anesthesia have an anesthetist there whose entire job is to monitor the type and amount of drugs going into the patient. For a full treatment of these and other issues, see the Analysis page.

If a drug is administered to several people at once, all of whom get knocked out immediately, then this trope overlaps with One Dose Fits All. Knockout Gas is an area-effect variant subtrope, which is subject to different, but related rules. Tranquilizer Dart is another common delivery method, often in a Knockout Ambush. Compare Magic Antidote, Stun Guns, Tap on the Head, and Slipping a Mickey. Not to be confused with Instant Seduction.