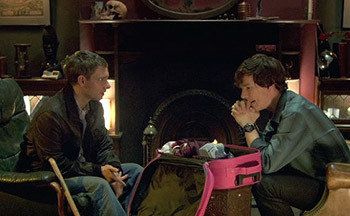 "We've got a serial killer on our hands. Love those, there's always something to look forward to!"
— Sherlock Holmes
Advertisement:

Dr John Watson has just returned from service in Afghanistan with nightmares, a psychosomatic limp and a bullet wound for his trouble. John's therapist encourages him to keep a blog about his life as a returned vet, but it doesn't seem to help since, as John himself puts it, "nothing happens to [him]". And to top it all off, his army pension isn't enough to keep living in London. All in all, things are kinda crappy for John until he runs into Mike Stamford, an old friend from his days at St Bart's. As it happens, Mike knows of someone who's looking for a flatmate...

As if to prove this, Sherlock Holmes is introduced to John beating a cadaver with a riding crop For Science!, being completely oblivious to the advances of the St Bart's morgue attendant Molly Hooper and texting people the solutions to murder cases. From a glimpse of John and a brief lend of his mobile phone, Sherlock is able to deduce that John is an army doctor home from service with a psychosomatic limp who disapproves of his alcoholic divorcee brother (though he wasn't quite right).

John goes to look at the flat with Sherlock and quite likes it. Sherlock introduces him to the landlady, Mrs Hudson, for whom he did a favour once. After John agrees that the flat would be a good place to live, he is interrupted by the arrival of Inspector Lestrade, who needs Sherlock's assistance with the fourth in a series of identical suicides that have been occurring. Sherlock leaves, before returning to ask John to come along since he's a qualified doctor who might be able to help. In the taxi, they talk and Sherlock explains his job: he's a consulting detective, one who helps the police with problems when they're out of their depth. He also explains his first deductions of John. John is amazed, naturally, and Sherlock is intrigued by someone who appreciates his deductions.

They go look at the corpse, a woman dressed in pink. When they get there, John finds that the police don't like Sherlock — the first officer they meet, Sgt Donovan, calls Sherlock 'freak' and another officer, Anderson, seems to really dislike him (after Sherlock reveals his affair with Donovan, it's easy to see why). Sherlock and John examine the corpse and find a few anomalies: one, she wrote 'Rache' on the floor next to her. While Sherlock recognises this as being an incomplete 'Rachel', the question still remains: why? Two, Sherlock sees that she had a suitcase, but no suitcase was found. Finally, her phone is missing. Sherlock has a brainwave and runs out of the scene, leaving John to walk home. On his way out, Donovan gives him some advice: stay away from Sherlock, whom she calls a psychopath who gets off on crimes and puzzles. She also says that she fully expects Sherlock to eventually get bored of solving crimes and start committing them. John gets back to the main road and phones around him start ringing. He finally answers one in a public phone box and is picked up and taken to an empty warehouse, where a man with an umbrella identifies himself as the closest thing Sherlock has to a friend (an enemy) and offers John money to spy on Sherlock. John declines and is taken back to Baker Street.

John tells a remarkably unfazed Sherlock about the man's offer. Sherlock isn't bothered by the event and asks John to text a message to a certain number. John sees that Sherlock has the woman's case, and texts the message to the number- the victim's phone. The message is designed to freak out the murderer and gives an address. Sherlock and John go to a restaurant near the address and when a cab arrives, they chase it. However, the cab's passenger has a perfect alibi, and they return home only to find a drug bust in progress- Lestrade, thinking that Sherlock was withholding evidence, orchestrated the bust so he could search the flat. They find nothing, but a cabbie arrives for Sherlock, and he's got the victim's phone. Sherlock follows the cabbie outside, where the cabbie tells him that he doesn't actually kill his victims — he talks to them and they kill themselves. Holmes' curiosity gets the better of him, so he gets into the cab.

Sherlock and the cabbie drive to a specially-chosen place, where they play a psychological mind game. The cabbie explains that he has a sponsor, a person who is giving him money for each person he kills, money that will go to his children. In addition, he's dying and thus has nothing to lose. Sherlock milks the killer for information while the killer reels Sherlock in by suggesting his game as the ultimate test of Sherlock's observation and judgement. John follows Sherlock, but the trail ends with two seemingly identical buildings. He picks the wrong building, but at the crucial moment, he shoots the cabbie through a window. Sherlock manages to get the name of his sponsor out of the man — Moriarty.

Outside, Sherlock talks to Lestrade about the cabbie until he realises that John killed him. The man with the umbrella and his assistant arrive, and Sherlock reveals who he is — Mycroft, Sherlock's older brother. They have a brief fight before Sherlock and John leave, and Mycroft decides to step up surveillance on his younger brother.