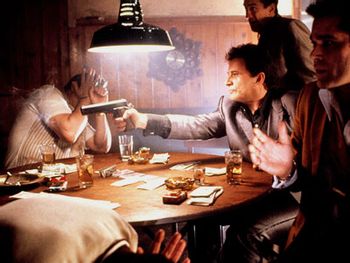 Dude, he brought you your drink. What more do you want?
"Some poser hands me cake at a birthday party.
Whatcha want me to do with this? Eat it?
HAPPY BIRTHDAY TO THE GROUND!
I threw the rest of the cake too!
Welcome to the real world, jackass!"
— The Lonely Island, "Threw It on the Ground"

A character with a hair-trigger temper flies into a rage at the slightest provocation. Masters of Disproportionate Retribution, they react explosively to the slightest annoyance. Unlike someone with a Berserk Button, who is generally calm until a specific button is pressed, characters with a hair-trigger temper can be set off by nearly anything. This makes them far less predictable — and far more dangerous.

The expression comes from firearms: a hair-trigger is one that’s been designed or modified so that it only takes a very light pull to fire the gun. This can help with accuracy because there’s less time in which one’s aim can wander between starting to pull the trigger and when the sear inside the gun actually trips. At the same time it’s dangerous because there’s less mechanical resistance to the gun accidentally going off at the slightest bump, which is why one often needs to push the trigger forward or pull a heavier second trigger to “set” the hair-trigger before it will work. Alas, people with hair-trigger tempers seldom have such a safety.

In comparison to the "avoid the Big Red Button" approach with someone with a Berserk Button, conversation with someone like this is like trying to navigate a minefield without a metal detector. You know the danger is there, but you have no clue exactly where it is. At best they're tetchy and anxiety-inducing. At worst, they're a surly, dangerous, ticking time bomb. The very act of trying to talk to them might be enough to set them off. Trying to joke with them is downright suicidal. And even just trying to stay away from them won't necessarily help; they're likely to take being ignored or avoided as a deliberate snub, and... well, you get the picture.

Characters with a hair-trigger temper are generally grumpy to everybody, but they usually have a favorite victim for their rampages — often a Naïve Newcomer who doesn't understand how they keep managing to offend the guy. This can be harmful to the victim's health — while heroic characters with a Hair-Trigger Temper generally restrain themselves to verbal abuse, Anti Villainous ones can get physically violent, and out-and-out villainous ones may even kill people for annoying them.

Sometimes, the character is this way because they're generally irritable and misanthropic — they don't really like anyone they deal with. Sometimes the character is suffering from Intermittent Explosive Disorder

. Sometimes (female-exclusive) they might just have a bad case of PMS. And sometimes, the character with the Hair-Trigger Temper is trying to pick a fight or intimidate or abuse someone. With the latter scenario, it doesn't really matter what you do or don't say to them — they will use it as an excuse to go off on you and make your life hell, essentially doing a verbal version of Why Did You Make Me Hit You? — behaving badly and then pinning the blame on the person being attacked. These kinds of people are generally called bullies. If someone tougher or higher ranked than them tells them to knock it off, they probably will, at least for the moment. Characters with a Napoleon Complex are usually known for having a Hair-Trigger Temper.

In a Four-Temperament Ensemble, this character is Choleric. Very, very Choleric.

This can obviously have disastrous consequences though if they let their temper get the better of them far too often. Expect the victim who has taken too much abuse to suddenly snap in front of them with sudden and alarming reversal of roles, where the abuser's rage now pales in comparison to their victims.

is the Real Life Trope Maker for this trope.

Compare Drama Queen (who acts dramatic at the drop of a hat).

Contrast Extreme Doormat (who will not respond angrily to anything), Tranquil Fury (when a character's anger does not compromise their self-control), Passive-Aggressive Kombat, Rage Breaking Point, The Stoic (who shows little if any emotion) and Prone to Tears. The Sociopath is a very likely character to have this, due to their low tolerance for inconvenience or irritation, which is often displayed through a lack of impulse control. The particularly psychotic examples almost always overlap with Ax-Crazy. Doesn't blow up too, unfortunately.

And by the way, anyone bringing any real life examples here WILL BE SHOT ON SIGHT!

A notable character flaw for Sunset Shimmer is her tendency to snap as things get further out of her control. Even long after her Heel-Face Turn and being The Protagonist of the entire series, her anger issues still remains an integral part of her personality.

A notable character flaw for Sunset Shimmer is her tendency to snap as things get further out of her control. Even long after her Heel-Face Turn and being The Protagonist of the entire series, her anger issues still remains an integral part of her personality.