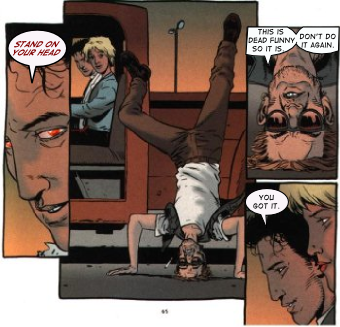 Haley: You don't hear or see us.
Guard 1: Huh, must be a trick of the light.
Haley: You don't work here anymore.
Guard 2: Crap, how am I going to pay my mortgage?
Haley: You're actually a yellow-footed rock wallaby.
Guard 3: Screw this guard stuff, then. I'm gonna go find a wizard to polymorph me back. [hops away]
— The Order of the Stick, "And Yes, There is a Santa Claus"

Some people are persuasive, some people have even more power than that. Whatever they say, you have to do it. No escape clause, their voice instills immediate obedience. They can tell you to stand on one foot and quack like a duck, to betray your loved one, or to kill yourself, or to just die. If the speaker is of a sadistic turn of mind, they may come up with a more creative Fate Worse than Death to put you through.

The power is most often tied to the voice of the character, but there are a few variations, such as the Jedi Mind Trick. A frequent cause of Brainwashed, Brainwashed and Crazy and creepy Power Perversion Potential. This is usually the main power of a siren. Heroes tend to get Charm Person rather than a Compelling Voice. See also Hypnotic Eyes for a Sister Trope.

Note that this isn't just about voices that are persuasive. This is about orders that one literally cannot disobey, usually for some supernatural reason. A frequent drawback to this power, however, is that it's subject to Literal Mindedness. That is, the listener does what the compeller says, not necessarily what they want.

Hopefully the compeller remembers to figure out a little about the person, or Intrinsic Vows may stop this from working...