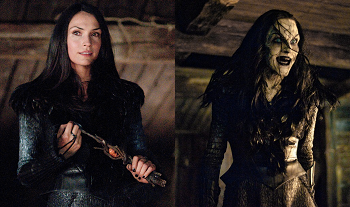 Which witch do you wish to bewitch?
"A vampire appears to be a normal person until the feed is upon them. Only then do they reveal their true demonic visages."
— Giles, Buffy the Vampire Slayer
Advertisement:

Most supernatural monstrosities and scientific sins against nature that maintain a Masquerade can hide their true nature with a glamour, or otherwise shapeshift into a nearly seamless human disguise.

Sometimes, though, they just want to play with their food. They drop the façade and show their true form, getting scary eyes, growing fangs, horns, Pointy Ears and Femme Fatalons or even claws. The changes can range from the purely cosmetic to the practical. In video games or RPGs, this usually affords attack bonuses or new forms of attack altogether. In film, TV, or literature it usually means any Innocent Bystanders nearby just dropped a rung in the food chain.

This is a common trick for vampires, demons, werewolves, and other monsters. Think of it as a super-fast One-Winged Angel act, but typically without the power of a full transformation (though they might effectively gain strength by not spending power to maintain an illusion).

Truth in Television, but most clearly seen in the small, practically harmless animals whose only means of defense is to suddenly flash vivid colors or markings, or seemingly double in size, or otherwise appear to suddenly change into frightening monsters. Many of them couple this with making sudden terrifying noises for further scaring-the-crap-out-of-enemies-ery.

Alastor is one of the most evil, dangerous and twisted entities ever to roam the unholy streets of Hell.

Alastor is one of the most evil, dangerous and twisted entities ever to roam the unholy streets of Hell.