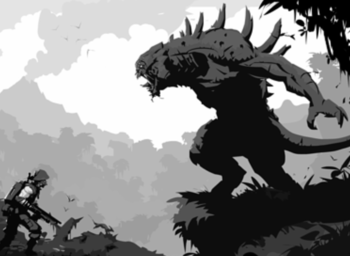 Surprise — a monster! But you have time to recover from the shock of its appearance because it won't attack until it has posed dramatically and let out a Mighty Roar. Roaring is like a monster's hello. They must become hostile when heroes don't have the decency to roar a proper return greeting.
Advertisement:

Often used as a cliffhanger to confrontations because ending after a punch is thrown seems an interruption, while a warcry is the last stop to get off at before the fight starts.

In real life, an animal that roars is warning you away. It doesn't want to fight you; it wants you to leave. An animal that tries to sneak up on you is much more likely to harm you. Two animals engaging in a territorial fight with each other are more likely to start with roaring and then get to the beating if neither of them backs down.

Contrast Hiss Before Fleeing. Compare Transformation Name Announcement, Screaming Warrior, and In the Name of the Moon, which are often the tropes you get when the hero does this. A similar trope for enemies capable of speech is Simultaneous Warning and Action. If the crucial element of surprise is blown by this it may be a case of With Catlike Tread. If the roar is a recurring roar and unique to the monster, it's a Signature Roar. If you thought "beating" meant "defeat", you may be looking for Pre-Mortem One-Liner.

Subtrope of Noisy Nature, assuming it's a Real Life animal.