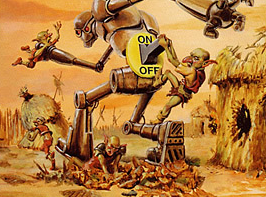 I have learned many things while I was one with the robot. Here's one: He's got an off switch right on his back.
"Oh gee, I wonder where I should shoot 'im. I mean, this could take all of my accumulated gamer skills over the years, oh geez, could it be, ah, the giant glowing blue fuck-me light on his forehead!?"
— The Spoony One, The Spoony Experiment
Advertisement:

Boss villains are usually invulnerable all over their body, with only the exception of weak points which you can attack for massive damage.

Therefore, if you see a shiny or glowing target anywhere on the boss villain's body, chances are that's where you need to attack. Common targets are the head, eyes (particularly if it's a cyclops), hands (if the monster is giant), tail, groin (if it's male), the inside of the mouth, any built-in weapons, or a soft underbelly (including the heart, but even for living enemies, this is much less common than it is in Real Life). Machines often have a red Power Crystal, Heart Drive or something made of glass that practically screams "Hit me!"

If the boss is particularly large, it might require a difficult trip to get there. Sometimes, the weak point may not be exposed right away, meaning it may require a little ingenuity on your part to get it out in the open. Sometimes the target will be reachable only when the boss does a certain move, in which A.I. Roulette or Artificial Stupidity must be in play to keep the game winnable. This is particularly true for Platformers, Action-Adventure games, and Third Person Shooters.

Named for the line in the E3 2006 Sony presentation (which also named Giant Enemy Crab, This Index Hits for Massive Damage, and Real-Time Weapon Change).

Rule 25 of the Evil Overlord List forbids making machines with one of these, and you'd be wise to heed this rule if you wish to conquer the world.

But apparently everyone's genitals are a weak point that cripples them with pain when attacked.