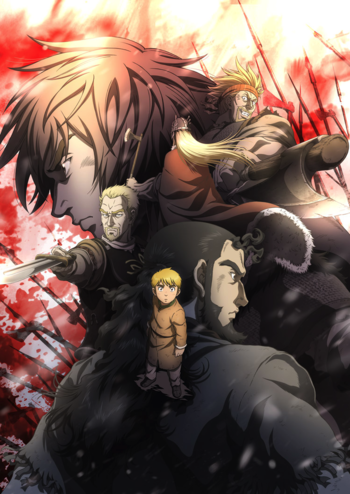 A manga series created by Makoto Yukimura, author of Planetes. Vinland Saga began serialization in 2005 (starting out in Shōnen Magazine, it later moved to the seinen publication Monthly Afternoon a few months into its run), and follows a series of adventures during the age of the Vikings.

As we follow Thorfinn around, the story expands to the Danes' pacification of England of the early eleventh century and the rise to power of King Canute

. The first 8 volumes center on Thorfinn as a revenge-obsessed teenager, before a Time Skip into his life as a young adult facing a different kind of struggle.

Ultimately the series has a lot of brutal (but fun!) battles. It's also fairly accurate about viking culture, so it teaches you stuff while you read (yes, it's that awesome). It's also got some pretty snappy dialogue and humorous little exchanges between characters both major and minor.

It's a Historical Fiction retelling of the classical Viking sagas known as The Vinland Sagas, although focusing on Thorfinn Karlsefni rather than on Leif "The Lucky" Erikson.

The series is licensed in English by Kodansha Comics USA, with nine omnibus volumes being released and a tenth confirmed to be published later in summer 2018, bringing the series up-to-date with the Japanese release.

A 24-episode anime series, covering the manga's first arc, was announced in 2018 and released on July 7th, 2019. It is animated by WIT Studio with supplemental animation by studio MAPPA.

For the actual medieval Icelandic saga, see The Vinland Sagas