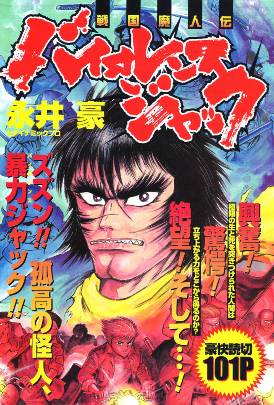 Violence Jack is a Post-Apocalyptic, Dark Fantasy anime and manga series by Go Nagai that was released from 1973 to 1990. A Stealth Sequel of sorts to Devilman, the series is particularly infamous for not only including large amounts of sex and gory violence, but also has cameos from several of Go Nagai's other manga as well. In fact, many of the chapters seem to be dedicated to taking classic Go Nagai series and then Deconstructing them by placing them in Violence Jack's brutal setting.

The entire Kanto region of Japan is destroyed in both an earthquake and a volcanic eruption. Any survivors are now forced to fight for their lives, due to biker gangs and warlords having taken over. The worst of them is Takatora Dōma, also known as the Slum King, who practically has all of Kanto under his control.

Luckily, there's Violence Jack, a mysterious, gigantic man with an equally gigantic knife. Unluckily, he's not exactly careful about collateral damage or danger to bystanders, although he's still the closest approximation to a good guy in this Crapsack World. Jack travels around Kanto, killing warlords and, eventually, Dōma himself.

Violence Jack has three OVAs based on three different arcs from the manga (Harlem Bomber, Evil Town, and Hell's Wind). All three have been released in the US, the UK, Italy, and France, but were heavily censored (especially Evil Town). Italy got lucky with Evil Town and got the least censored version, leading many to seek it out. It wasn't until a few years later that uncensored editions were released. Later, in March 2022, Discotek Media announced that they had gotten their hands on the masters for the OVAs, and would be releasing completely uncensored HD remasters of all three on Blu-Ray later that year.

The series got a short revival in 2005, a short 2 Volume adventure under the title of Shin Violence Jack.

As for the manga, the only place it's ever been released outside of Japan is Italy and very few arcs have been scanlated into English (though this is slowly changing).

No relation to Samurai Jack.

With Jack nowhere to be seen (though that is about to change), one Mook by the name of Lazer isn't very happy about the situation as it currently stands.

With Jack nowhere to be seen (though that is about to change), one Mook by the name of Lazer isn't very happy about the situation as it currently stands.