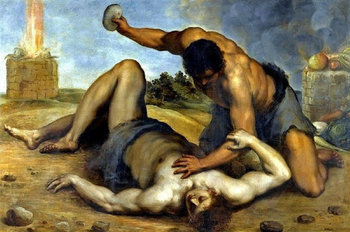 Who knew rocks were good for Fratricide?
Killer Croc: There I was, holed up in this quarry, when Batman came nosin' around. He was getting closer, closer...
Poison Ivy: And?
Killer Croc: I threw a rock at him!
[chirping crickets]
Poison Ivy: [ignoring Croc] So, Harvey, what became of the giant penny?
Killer Croc: [indignantly] ...It was a big rock...
— Batman: The Animated Series, "Almost Got 'Im"
Advertisement:

One thing that seems true regardless of where you are is that people can come up with some creative and scary ways to hurt each other. But what does someone do when conventional weapons aren't available, they aren't interested in or skilled at hand-to-hand-combat, and when they are in a rush? For the strongest and bluntest of characters, attacking their enemy with a rock will suffice.

This signals a few things about the character. One is that they are physically strong or at least going through enough of an adrenaline rush to gain some strength. This character is typically focused on doing the most damage they can as easily as possible, often marking them as a Combat Pragmatist or a primitive brute. Another possibility is that the character, for whatever reason, doesn't have another weapon to use and is acting out of desperation.

Whether they're desperate or just brutish, however, one fact remains the same: they want to do some damage, and are willing to resort to literally crushing someone with a stone to accomplish their goal.

To apply, the weapon need not be a rock specifically. Concrete, bricks, cinder blocks, and other rock-like objects can count, as well.

Truth in Television, of course; a decently-sized and sturdy rock or brick will do just as well as any other bludgeon in the event that you need to defend yourself quickly. Either being used in melee or being thrown.

When turned into a superpower, this is Dishing Out Dirt. Defiant Stone Throw is when the character throws a rock as an act of defiance instead of using it as a weapon although there's nothing stopping the tropes from overlapping. Subtrope of Improvised Weapon. Unrelated to Homing Boulders.