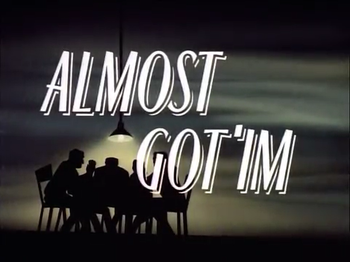 We open on a dimly-lit Bad-Guy Bar where four distinctive pairs of hands—one in white gloves atop a purple suit, one with fused, flipper-like fingers, one relatively human and one horribly scarred, and one green and reptilian—are dealt cards. It seems that The Joker, Penguin, Two-Face, and Killer Croc are having themselves a poker game. Poison Ivy soon shows up and asks to join, remarking that she's running from both the cops and Batman. The other villains agree, and Killer Croc remarks that it's odd that none of them have successfully "got 'im" by now. This prompts a debate over who has truly come the closest to defeating the Dark Knight. The Joker takes control of the situation and suggests that they all tell their stories while they play, and invites Ivy to go first.
Advertisement:

The former Dr. Isley tells a tale about last Halloween, when she rigged up jack-o-lanterns around the city with a powerful allergenic gas that tormented the people of Gotham. Batman naturally arrive at a pumpkin patch to investigate, only for Ivy to trigger a massive explosion of the gas that incapacitated him (her natural immunity to poisons and toxins left her unaffected). Just as she was about to unmask him, though, Batman was able to activate a remote driving function of the Batmobile that left Ivy literally up a tree (or, in this case, a telephone pole).

Two-Face insists on going next, recalling an incident where he robbed Gotham's largest bank of "two million in two-dollar bills." He also recruited some local thugs called "The Two-Ton Gang," who captured Batman and brought him to the double-talking villain. After removing the Caped Crusader's utility belt to ensure that he couldn't use gadgets, Two-Face strapped him to a giant penny and has it thrown into the air, reasoning that Batman would be crushed or horribly maimed regardless of how it landed. Unfortunately, he realized that his trademark coin—which he needs to make decisions—was missing; Batman managed to swipe it before being tied up and promptly used it to cut himself free. After some death-defying acrobatics, the Dark Knight successfully captured the group; to add insult to injury, the bank allowed him to keep the giant penny.

After a brief interruption from Killer Croc—whose own story simply involved throwing a rock ("it was a BIG rock...") at Batman—the Penguin starts to recount his exploits. During a past criminal endeavor, he deliberately spread false rumors that he planned to steal some extremely rare condors from the Gotham Zoo. When Batman showed up, his monocled adversary locked in him what he grandly called his "Aviary of Doom," a title which results in a Smash Cut back to the gathered villains, who mock Penguin for his pomp. Humbled, the Penguin continues, explaining how he weaponized the entire bird population of the aviary to thwart Batman, including hummingbirds with toxin-dipped beaks and a massive cassowary with a terrible temper. Despite being stunned by the poison and nearly defeated, though, the Caped Crusader was still able to escape, although the Penguin got away.

With the other stories told, the Joker announces that his "almost got 'im" tale is unquestionably the grandest and most successful—especially because it happened just last night. The Clown Prince of Crime successfully captured Batman, knocked him unconscious, and dragged him to a late-night TV talk show's studio, which he'd already commandeered with the help of Harley Quinn. The two tied Batman to a massive electric chair that was rigged up to raise the voltage whenever laughter sounded nearby. The Joker pumped the auditorium full of laughing gas, then had Harley recite names from the phone book; the (literally) captive audience couldn't help but giggle because of the gas, which gradually activated the chair and sent the Dark Knight into convulsions. Just when all hope seemed lost, though, Catwoman appeared to save Batman. She was able to set him free, but Harley and the Joker teamed up to knock her unconscious.

Back in the present, the Joker announces that he's won the poker game (albeit through blatant cheating), but Killer Croc is confused—the clown still hasn't explained how he "got" Batman, considering that he let him live. The Joker gleefully remarks that he's going for Revenge by Proxy instead—he's trussed Catwoman up at a local pet food factory, where Harley is prepared to send her through the processing machines. Even the other villains are sickened by this, but the Joker thinks it's a hilarious gag...until "Croc" stands up and, with a sudden vocal shift, remarks "I don't think so." He throws the Joker across the room and reveals himself as Batman, who set up the disguise to trick the Clown Prince of Crime into revealing Catwoman's hiding place. The other villains promptly pull their weapons and prepare to shoot, only for the Caped Crusader to click his fingers. The rest of the bar patrons immediately produce guns of their own—it's the Gotham City Police Department, who entered the bar disguised as criminals and now have the bad guys completely surrounded.

Leaving the cops to handle his other foes, Batman heads to the factory to save Catwoman. As soon as he arrives, Harley activates the conveyor belt she's tied to and gleefully taunts the Dark Knight, saying that there isn't enough time to both rescue Catwoman and arrest her. Batman promptly takes a third option and simply cuts the power to the whole factory, stopping the belt and allowing him to snag Harley. While the police show up to lead Dr. Quinzel away, Batman and Catwoman meet on a nearby roof. She thanks him for saving her, and remarks that she hopes that someday, the two can find themselves in a world "without masks." Batman admits that he wants the same thing, but when Catwoman attempts to remove his famous cowl, he distracts her and manages to slip away. The cat burglar looks after him swinging through the rooftops and sighs the final line of the episode: "Heh...almost got 'im."

based on this episode.

Batman's got a choice - save Catwoman, or capture Harley. Or...

Batman's got a choice - save Catwoman, or capture Harley. Or...