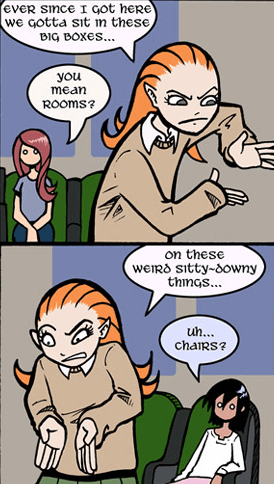 "And this text thingy down here, with the writing!"
"You mean the caption?"
"Whedon's voice is so distinct that 'Buffy Speak' has become a mode of language unto its own—one codified by a jumbling of nouniness and adjectiviage into languagey-bits that sound like your brain forgot words before spontaneously re-remembering them."
— Kyle Kallgren, on the subject of Joss Whedon's production of Much Ado About Nothing... while using Buffy Speak
Advertisement:

Any of a variety of speech patterns used to indicate that a character, while intelligent, is perhaps too young, too inexperienced, and/or insufficiently educated (or simply talks too fast) to properly express the complex ideas and thoughts that they clearly possess.

One of the most obvious elements is a lack of relevant vocabulary, leading to both unconventional adjectival-noun structures like "shooty-gun thing", and incomplete, floundering similes that turn back on themselves in frustration: "That idea went over like... like... like a thing that doesn't go over very well." Metaphorgotten is frequently a side effect. Often includes Oh God, with the Verbing! or similar. And sometimes Name McAdjective is employed.

When properly handled, Buffy Speak can give the sense of a teenaged group's special jargon or argot without necessarily imitating anything actually found in the real world. Slang language, especially for the younger set, tends to change at warp speed. Buffy Speak allows a level of timelessness that helps avoid Totally Radical tropes. Improperly handled, it can sound ludicrously fake and may damage Willing Suspension of Disbelief.

In linguistics, this is typically referred to as a "nonce" — a term or figure of speech created for a single occasion, typically to quickly move along conversation or direction.

We also use Buffy Speak to name some of our tropes:

For some reason, this trope is named for the speech patterns of the teenage characters in Buffy the Vampire Slayer, which ran from 1997–2003. The show's creator, Joss Whedon, is often credited with "creating" this form of writing (also called Whedonspeak). However, there are instances of this type of language from writers like William Shakespeare, Charles Dickens, H. P. Lovecraft, and P. G. Wodehouse, making this trope significantly Older Than They Think. This type of speech has existed for as long as language itself, and is actually Older Than Dirt.

What about the thing where you click here if it ends?

The UFO Team describe their robot as it appears in the 6th Wars.

The UFO Team describe their robot as it appears in the 6th Wars.