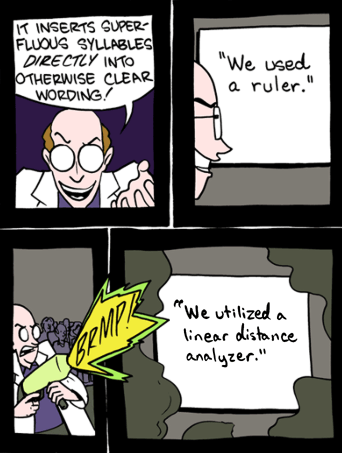 Caption—Space to add clarification to the purpose of the image or add a meta-gag relevant to the trope's definition.
Elizabeth Swann: Captain Barbossa, I am here to negotiate the cessation of hostilities against Port Royal.
Captain Barbossa: There are a lot of long words in there, Miss; we're naught but humble pirates. What is it that you want?
Elizabeth: I want you to leave and never come back.
Barbossa: I'm disinclined to acquiesce to your request.
Elizabeth: [stares at him in shock]
Barbossa: Means "no."
— Pirates of the Caribbean: The Curse of the Black Pearl
Advertisement:

Sesquipedalian: A long word, or characterized by the use of long words. From the Latin roots meaning "a foot-and-a-half long."

Loquaciousness: That would be garrulousness, verboseness, effusiveness. How about "chattiness"?

A predilection by the intelligentsia to engage in the manifestation of prolix exposition through a buzzword disposition form of communication notwithstanding the availability of more comprehensible, punctiliously applicable, diminutive alternatives. Also known as "gross verbosity". Related to this is the use of inkhorn terms, loanwords from a foreign origin that are pretentious to an average speaker.

In brief: "smart" characters using long words when short ones would be better, especially when they are also motor mouths. Characters afflicted with this trait often seem to go out of their way to over-complicate their speech, probably because writers think that this is the only way to show that someone is more intelligent than the average writer. This could also be the trait of a particularly anal-retentive character who always has to be right, the trait extending so far that the character always has to use exactly the right word — never using "blue" when "azure" or "indigo" or even "royal blue" would be more accurate, for example.

Occasionally such characters may drop the long words if things get particularly dire, to emphasize just how bad things are (in the same way as a Sarcasm Failure). Alternatively, they may get even more wordy as they get more emotional, leading to increasingly detailed but ultimately incoherent ranting that falls too easily into wangst. Frequently another character will respond with something like "Wouldn't it be easier to just [whatever the brainy person said, in layman's terms]?" or "And [layman's terms version], too!" In The United States, when someone really has no idea what the person says, they'll say something like, "Could you repeat that in plain ol' Galveston English?"

can lead to this kind of behavior. People with Asperger Syndrome and some forms of Dyslexia may do this in an attempt to be as precise as possible, ironically making themselves harder to understand.

The Narcissist, The Paranoiac, and other less-than-pleasant personalities may engage in this as well, often to try and convince others—or themselves—that they are smarter than most people. On a more sinister level, it can also be used as a form of verbal Gaslighting, in order to confuse, swamp, and manipulate the receiver so that a particular end may be met. The Con Man sometimes makes use of this trope too when passing off as a professional or an expert in their apparent "field", duping others into thinking that the only reason they don't understand what they are selling is that they are smarter than them or that they can trust them, when in fact they are spouting nonsense and looking to take advantage of their ignorance.

While maintaining a strong endeavor to avoid flogging a deceased equine, err I mean trying hard not to beat a dead horse, in some cases technical jargon is necessary to be understood, but in too many cases a person doesn't consider that the audience is not that technically inclined and a simpler, although less precise description would work just as well.

One of the symptoms of Spock Speak, but averted in a good Private Eye Monologue. Usually also a Motor Mouth. Goes well with British accents, too. Used frequently in Sommelier Speak. Often takes advantage of the fact that Talking Is a Free Action, and could be a case of Acoustic License if the surroundings would make it difficult to hear clearly in the first place, much less understand the words. Can often lead to an Expospeak Gag. See also Techno Babble, Antiquated Linguistics, Sophisticated as Hell, Technical Euphemism, and Department of Redundancy Department. May result in Calling Me a Logarithm. If someone tries for this and can't get the words right, they're perpetrating Delusions of Eloquence. If the author commits this, see Purple Prose. The word Antidisestablishmentarianism is almost guaranteed to show up as well.

Very heavily associated with the Steampunk genre in particular, and Truth in Television in that case, as the Victorians did speak a form of English that was more complex and verbose.

It's worth noting that there is a word for the fear of long words; ironically, it's "sesquipedalophobia" often exaggerated by people into "hippopotomonstrosesquipedaliophobia". There is an element of Artistic License – Linguistics involved, as "phobia" is a Greek root, while "sesquipedalo-" is Latin* In fact, Greek lost the chw, qu, and gw sounds around 1000 BC; that's why we say "phobia" rather than "phogwia". See also Scary Science Words.

The polar opposite of Buffy Speak and Layman's Terms. Big Words redirects here, for those of us who prefer to avert this trope in Real Life (or are just incapable of spelling it correctly off the tops of our heads). Contrast the Laconic Wiki. Compare and contrast Proverbial Wisdom for the typical speech patterns of wise, enlightened, and spiritual characters who use a lot of riddles, proverbs, and flowery metaphors. Also note the similarity to Techno Babble. May require one to have a Translator Buddy.

When a character attempts this but lacks the vocabulary to follow through properly, see Malaproper.

In other words: Look.