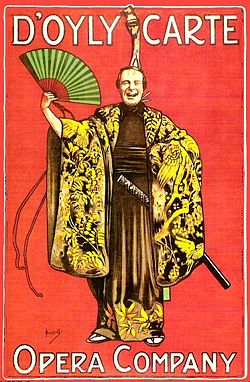 One of the most famous, if not the most famous work by Gilbert and Sullivan, The Mikado, or, the Town of Titipu opened in 1885. The story of its conception was dramatized in the 1999 film Topsy-Turvy.
Advertisement:

In a quite fictionalized version of Japan, Nanki-Poo, the son of the Mikado (the Emperor), wanders the streets as a Wandering Minstrel. Meanwhile, a hapless tailor named Ko-Ko has been saved from the chopping block and appointed High Executioner. Instructed to execute somebody before The Mikado returns, Ko-Ko happens upon Nanki-Poo, who is in love with the maiden Yum-Yum, and contemplating suicide because she's due to marry Ko-Ko himself. Seeing an opportunity, Ko-Ko decides to help Nanki-Poo have his death wish and to be with Yum-Yum. Hilarity Ensues.