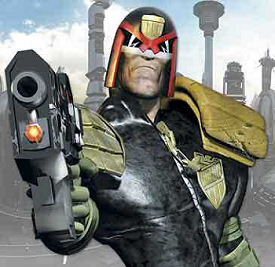 "I am the law!"
Walker: Name's Walker, son. Know it. Fear it. Obey it. I am your judge, executioner, jury, executioner, jailer, and, if necessary, your executioner.
Danny: Uhh... you said "executioner" three times.
Walker: I like that part of the job.
— Danny Phantom

In modern legal systems, the power to render judgment is usually spread among many people: a judge decides questions of law, a jury decides questions of fact, and someone else carries out the judge and jury's verdict—in the case of capital punishment, an executioner. It takes time and careful consideration, but the proper legal procedure can be such a drag sometimes, can't it? You have to arrest and house the perp, go through the expense of a trial... plus it means you have to get lawyers involved.

Perhaps this is why so many societies, particularly those with dystopian or evil leanings, go for the alternative: empowering a group of official agents with near-limitless authority to detain, sentence and punish offenders.

Of course there is a very good reason we don't have this type of law enforcement in civilization; If the Judges see themselves as noble and pure then they will most likely be Knight Templars, if they are insane they would often see all crimes are punishable by death, if they become corrupt then not only would they become Dirty Cops but would in turn become a Joker Jury and a Hanging Judge all in one go, and that's all assuming they don't have a grudge on you.

Needless to say you are probably not getting a fair trial.

When a private citizen acts as Judge, Jury, and Executioner without official sanction, he's a Vigilante Man. When it's an actual judge who's also jury and executioner, it's usually an example of Hanging Judge.

Not to be confused with Judge Judy and Executioner.