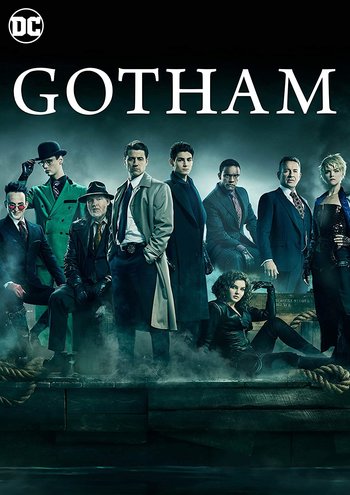 From the ashes of Gotham, A Dark Knight will rise.note From left to right: Oswald Cobblepot/The Penguin, Edward Nygma/The Riddler, Harvey Bullock, James Gordon, Bruce Wayne, Lucius Fox, Selina Kyle, Alfred Pennyworth and Barbara Kean.
"There is a war coming. A terrible war. There will be chaos, rivers of blood in the streets, I know it! I can see it coming!"
— Oswald Cobblepot; narration used in the opening credits
Advertisement:

A series based on the Batman mythos that started in 2014 on FOX, chronicling the story of a younger James Gordon (Benjamin McKenzie), an idealistic rookie detective for the Gotham City Police Department, before the Dark Knight and his colorful Rogues Gallery rise to fruition. In fact, Gordon's first case is investigating the murder of Thomas and Martha Wayne, the future Batman's parents.

Gordon's partner is the slovenly, semi-corrupt Harvey Bullock (Donal Logue), while the rest of the cast is rounded out by a young Bruce Wayne (David Mazouz), still reeling from the death of his parents; his butler and guardian Alfred Pennyworth (Sean Pertwee), trying to be a father to him; a growing roster of up-and-coming villains like Oswald Cobblepot (Robin Lord Taylor) and Edward Nygma (Cory Michael Smith); streetwise teen thief Selina Kyle (Camren Bicondova); and Barbara Kean (Erin Richards), Gordon's fiancée in season one.

One of three live-action DC Comics shows to premiere in 2014, along with The CW's The Flash and NBC's Constantine, with the latter being inducted into the Arrowverse with a post-cancellation crossover with Arrow. However, the nature of Gotham itself makes the idea of doing a post-series crossover with the Arrowverse pretty much impossible (it was notably missing from the Crisis on Infinite Earths (2019) crossover, when they establish other Batman films and continuities to be part of a shared multiverse), not least because up until 2019, neither FOX nor The CW had the rights to use the Batman himself in any capacity, with the Arrowverse resorting only to allusions and shoutouts to the caped crusader and Gotham City.

Originally pitched as a gritty, "Gotham City without Batman" story along the lines of Gotham Central, Gotham quickly evolved into a gleefully over-the-top show with a bold, striking aesthetic and a willingness to pursue all sorts of intentionally ridiculous plotlines.

The show ran for 5 seasons, with the final episode airing on April 25th, 2019. The showrunners then went on to create another Batman mythos-inspired "prequel" show, Pennyworth, which premiered in July 2019 on Epix and may or may not be set in the continuity of Gotham.

Compare with Smallville, a show with a similar premise in that it chronicles Clark Kent's adventures prior to becoming the Man of Steel.

Gotham's opening is just the title, occasionally added with a theme depending on the season.

Gotham's opening is just the title, occasionally added with a theme depending on the season.