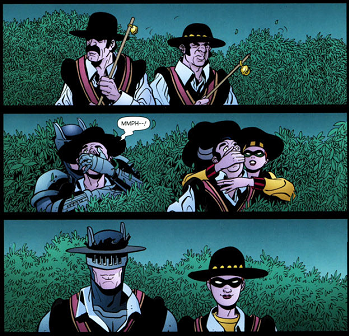 "They'll never suspect a thing!"
Lord Bottom: I have dispatched a hundred soldiers to Lannoch! They will be returning now!
William Wallace: [indicating his disguise] Were they dressed like this?
[Lord Bottom's eyes widen]
William Wallace: Actually, it was more like fifty.
— Braveheart
Advertisement:

The heroes or villains need to get access to the enemy stronghold. But how? By Dressing as the Enemy, of course. That still leaves the question of how to get enemy (or otherwise deceptive) uniforms. The solution to this is a time-honored technique:

This specific setup is optimized for comedy and is usually Played for Laughs. If it is Played for Drama, one or more of the steps may be altered.

If the trope is subverted, the fourth step will be different:

In either situation, the victims will be subject to one or more of these things:

"Breakout!" begins with Sly stealing components of samurai armor for a disguise.

"Breakout!" begins with Sly stealing components of samurai armor for a disguise.