Series / The Falcon and the Winter Soldier 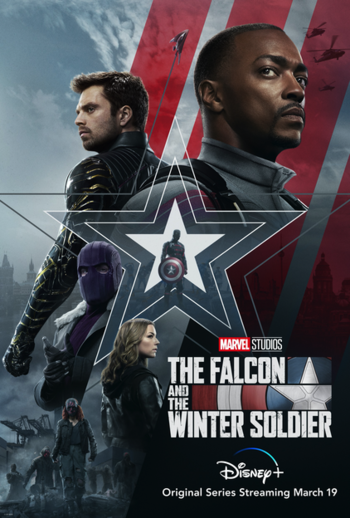 "The legacy of that shield is... complicated, to say the least."note Vertically: Sam Wilson, Bucky Barnes, John Walker, Helmut Zemo, Sharon Carter, and Karli Morgenthau.
"The world is upside-down. People need something to get behind. They need a symbol."
— James Buchanan "Bucky" Barnes
Advertisement:

The Falcon and the Winter Soldier note Renamed Captain America and the Winter Soldier in the series finale is a superhero action thriller / buddy miniseries created for Disney+ by Malcolm Spellman (Empire), based on the Marvel Comics characters of the same names. A spinoff/sequel of the Captain America films, it is the 25th overall entry of the Marvel Cinematic Universe, the second installment of Phase 4, and the second MCU series produced by Marvel Studios. Kari Skogland (The Handmaid's Tale) is the director of all six episodes.

The show made its debut on March 19, 2021, two weeks after WandaVision's finale, and concluded on April 23. The same day its finale aired, it was announced that a fourth Captain America movie was in development with the script being co-written by Spellman and series staff writer Dalan Musson.

* Shared with WandaVision and Loki, Trailer 1

The Falcon and the Winter Soldier contains examples of:

Captain America and the Winter Soldier

Zemo makes an interesting point about the super serum that leaves Sam & Bucky without a comeback.

Zemo makes an interesting point about the super serum that leaves Sam & Bucky without a comeback.