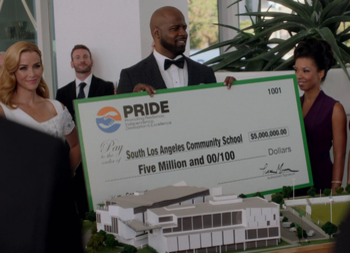 "Emma was very compassionate; and the distresses of the poor were as sure of relief from her personal attention and kindness, her counsel and her patience, as from her purse."
— Emma
Advertisement:

Rich people in fiction come in many shapes. Wealthy Philanthropists are filthy rich, but they are very well aware of their privilege and they know they have been extremely lucky in life. In addition, they are not ignorant of other people whose lot in life is considerably worse. To balance social injustices, they try to use their money to help the poor and other people who are in need. They can help local people with whom they might (almost) interact, or they may be involved in various charity projects, or they may even start huge foundations or charity organizations. Some of the actions might be done anonymously. Why do they do it? Good Feels Good.

Being a philanthropist who does much good serves as a characterization device to show that the character has a heart, and to further develop the character as a decent human being and worthy member of society. It might be apparent right from the start of the story, or it could be revealed as their Hidden Heart of Gold.

This character trope can also be used to show that the donor is only doing it for power or fame or to offset the evil they do to maintain their wealth or for tax reasons. It can result in Screw the Rules, I Have Money!, where they threaten to stop donating if they do not get their way.

The Philanthropist might instead be a Corrupt Corporate Executive. They're not doing it because good feels good, nor because they're trying to solve social ills. They're just doing it to launder their reputation and save money on taxes. They start a massive foundation to address a problem to show that they care without having to actually care. This way the villain character can become a Villain with Good Publicity. Boom, you spend a fraction of your wealth, and now the poors aren't coming for your money.

A Wealthy Philanthropist is likely to be Non-Idle Rich and related to Royals Who Actually Do Something. They are equally likely to be a Self-Made Man or come from Old Money. When one of these is a member of The Team, they're The Team Benefactor. If they're frustrated with their role, they're a Beleaguered Benefactor.

Compare to Uncle Pennybags who is incredibly wealthy and uses his money to help people as well, but he usually focuses on having fun. He is also more likely to spend the money together with those he has enriched. Compare to Rich Kid Turned Social Activist who's from a very rich background but tries to help the poor and downtrodden personally and directly.

Birdie explains the Park League is a group of nice rich people who formed the league in the '70s and they provide 90% of the Central Park money to improve the park.

Birdie explains the Park League is a group of nice rich people who formed the league in the '70s and they provide 90% of the Central Park money to improve the park.